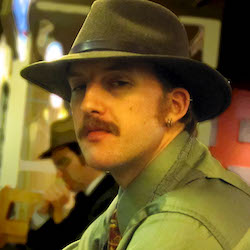 “Let’s rob a bank,” she said, and it made perfect sense at the time.

Of course, things that make sense when you’re hopeless and helpless and caught in a soul-sucking vortex of self-loathing and credit card debt, when every last ounce of your spirit is being wrung out of you by the crushing grip of social conformity, when you are desperate to impart some kind of meaning to your life, to leave an indelible trace of your existence, to scream to the heavens in a tiny, feeble voice, I was here…

Well, let’s just say that those same things don’t necessarily make sense when you’re three steps into the lobby with a shotgun in your hands.

The whole time it’s happening, I’m thinking, It was her idea. No matter what else is going on, I can’t seem to shake that thought.

Layla’s always been the one with ideas. Layla the artist, who in her junior year painted a fantastic, inspiring mural down the entire length of a high school hallway. Layla the artist, who now has a little studio in the back of the laundry room, where she dabs listlessly at canvasses that she never shows to anyone. Layla the teacher, who tries day in and day out to breathe a little life into the formulaic drivel she must pound into her students’ minds until the classroom is a box of human bonbons, hard shells of cynical indifference coating centers of soft, chewy mediocrity. Layla the teacher, who paints hope onto her face and tries very hard to forget about the mural lying under three coats of eggshell-white interior as she walks that very same hallway, day in and day out.

Me, I’m not much for ideas. I’m just Mack. I’m the easygoing, good-natured guy without a last name who delivers every package to your door with a smile. I’m the guy who’s in it for the long run, always chasing the ephemeral carrot of promotion while ducking the ever-present sticks of performance reviews and corporate downsizing. You see dozens of guys like me every day; we only exist for a few seconds while you sign a slip or whatever, then you forget all about us until tomorrow when we exist for another few seconds of your life. I’m one of those forgettable guys. You’ve probably already forgotten my name. It’s Mack, by the way.

We’d talked about it before, Layla and I—not about bank robbery specifically, but about doing something to break up the pointless monotony of our lives. We had hundreds of ideas, some mine, mostly hers, none with even the slightest chance of fulfillment. Let’s build a house. Let’s start a revolution. Let’s go to Burning Man. Let’s paint the kitchen. It was kind of how we passed the time, thinking of ways to prove that we were still individuals with depth and substance and free will, not just anonymous faces drifting back and forth through other people’s days. So when Layla put down her Xbox controller one night and said, “Fuck it, Mack, let’s rob a bank,” it made perfect sense. Hell yeah! Let’s break some laws and fuck some shit up! Let’s give a big middle finger to Corporate America and make off into the sunset like Bonnie and Clyde! Goddamn right, man!

Only here I am now, with a brown wool balaclava pulled over my face and squeezing my neck like an itchy noose, holding this big-ass gun and looking at a whole room full of shit-scared people who are looking back at me and I don’t know what to do. Goddamn right.

“Everybody down on the floor!” I yell.

“Everyone put up your hands!” Layla screams.

They give us a few seconds to realize what a couple of dumb jackasses we are; then the guard goes for his gun.

“Don’t you fucking move!” Layla screeches, dashing up and waving her tiny pistol in his face. “Everyone show us your hands!” A few hands go up tentatively; more follow as I fail to issue any conflicting demands. Layla pulls the guard’s gun out of his holster and backs away from him. She points both of her weapons around the room randomly, people ducking and flinching as her aim wanders. The tubby bank manager stands frozen in his glass-walled office like an animal trapped in a cage. The only person who seems to have his wits about him is the assistant manager. He kind of reminds me of myself, a tall, brown-haired, forgettable type of guy. He’s got his hands up like everyone else, but from the look on his face, you’d think this is a day in the park. His nametag reads “Hal.”

I’m locked up, trying to remember the next part of our plan, and though Layla’s face is obscured by the nylon stocking pulled over her head, I can tell she’s drawing a blank as well. That’s when I have my bright idea: I’ll fire a shot into the ceiling, to show them we’re serious, right? Totally bad-ass. I pump a round into the chamber and pull the trigger, holding the gun pointed straight up in front of me. The recoil drives the barrel back into my face, and the last thing I hear for a little while is the crunch of my nose breaking. All I can see is a burst of white light, which matches the explosive pain that wraps around my skull like a web of lightning. Fragments of ceiling tile rain down, coating my eyeballs with a fine, abrasive powder.

Bleary-eyed and half deaf, I watch Hal stride up to me and snatch the shotgun right out of my hands. For some reason, it’s like he’s taken all of my angst and desperation and futile rage away with it. For just a moment, one perfect, effortless moment that seems to go on forever, I’m totally at peace with the world. As I watch in a blissful daze, Hal spins around and blows his boss away.

Awestruck, I admire the fluid grace of his actions as he pivots on the balls of his feet and raises the weapon to his shoulder, falling easily into an expert’s stance. When he fires, the tempered glass wall of the manager’s office explodes cinematically. The old dude’s chest erupts in gore, and he flies backward, arms flailing, slumping gracelessly across his desk. It’s a flawless ’80s action movie death. I feel like applauding.

Hal turns around, a casual grin on his face. The cool, confident glint in his eyes has morphed into the unblinking, psychotic stare of the dangerously insane.

“You have no idea how long I’ve been waiting to do that,” he says.

“Are you out of your fucking mind?!” Layla shrieks, pointing both pistols at him gangsta-style.

Hal goes from ecstatic to murderous in about half a second. “Hey, back off, bitch! You two had your turn, and since you’re both clearly incompetent, I’m in charge now!” He advances on her, driving her slowly across the lobby as she backs away. Her guns are still pointed at his chest, but the barrels are wavering uncertainly.

“Fuck you! We’re robbing this bank!”

Layla’s eyes are just black slits behind her gauzy mask. Spots of saliva are starting to soak through the beige nylon stretched across her mouth. “You goddamn maniac,” she shouts, “just get the hell out of here!”

“No! I’ll do whatever the fuck I want! Shit, maybe I’ll rob this fucking place after all. Maybe I’ll kill a few more people, just for fun. I’m in fucking charge now!”

“Aaaaahhg!” roars Layla, pulling her triggers wildly. Hal fires at the same time, the shotgun’s blast nearly drowning the pop-pop-pop of the mismatched pistols. Terrified onlookers scatter as the bullets fly. Layla goes down, and my world ends.

So here I am now, trying to scoop my wife’s guts up from the blood-slick tiles of a bank lobby floor and put them back in her body, looking into her tear-filled eyes and begging her to stay alive. I press both of my hands across the huge hole in her belly. Somewhere beyond a throbbing cloud of white noise coming through my shattered eardrums, I can hear her sobbing, telling me she loves me. Hal is lurching around, trailing blood, screaming, laughing, shooting people. Way off in the distance, I catch a hint of police sirens, but at this point I don’t care about the police, I don’t care about Hal or the people he’s killing, I don’t care about myself. All I care about is Layla, whose hot blood is welling up around my fingers and spilling out of her like an overflowing toilet, and the whole time I’m thinking the same stupid thought over and over: It was her idea.

It made so much sense at the time.

Anders Benson lives in the mountains of western Maine with his wife and a menagerie of pets. A wilderness survival instructor, he has worked in welding/steel fabrication, railroad mechanics and pet care. He spends his free time hunting, whitewater canoeing, hiking and skiing. This is his first published story.