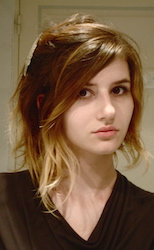 Please excuse Virginia’s tardy entrance. We were well on our way (though perhaps running a little late already) when we fell upon the most remarkable scene: a woman (not many years younger than I am, though I suppose it would be more appropriate to call her a girl), a girl stepped out onto the crosswalk, paying I imagine little attention to the crossing light, and upon doing so seemed struck by something, some sight perhaps, so utterly and profoundly that she paused right then and there in the middle of the black and white crosswalk, the breeze lightly stirring her thin dress, and from inside our car she seemed an apparition as she glittered and shimmered and was moved in place by the rippling heat of the sun (which rose remarkably early this morning, even if we are now in the latter days of May). Now I can’t imagine anyone would blame me for what happened next, because I was so struck by the beauty and fragility of it all that I was transported to another world and forgot for one second (not more than one second, I assure you) where I was in actuality, though I was anchored to our reality by the speed of the car which closed in upon this girl with such frightening velocity that that one second of absence was enough to ruffle the order and divide of the two universes which in that moment I inhabited simultaneously, and to eradicate one just as utterly and instantaneously as it brought the other into focus, along with the girl’s face, which displayed such shock and regret as I have never seen before on the visage of a human being (though I have known it to appear occasionally on the faces of cats). There are occurrences, though generally few and far between, which seem to remind us in these brief moments of transportation to other worlds just what it is about our very own version of reality that is clever and wonderful enough to prevent us from floating off to other planes of existence, which we might be tempted to do if our experience of living retained the aspect of uninterrupted banality which floods our daily lives and threatens to fill our lungs with an unbearable volume. It was at that moment of potential impact that such an occurrence tore its way through the veil of inert inevitability that cloaked the future that would follow that imminent disaster I had imagined briefly and, in that tearing of threads, prevented the snapping of a different sort of string: the young man who she had stood alongside at the curb streaked past my windshield in a desperate attempt to spin the thread of his beloved’s life out further (perhaps at the expense of his own), and life, in one of its precious and endearing triumphs over those suffocating portents that hang shadowy and constant over our heads, scooped the young man and his beloved up in its piteous and forgiving arms and lay the couple down again out of the path of my speeding car, the speeding car whose acceleration had jerked me quickly down to earth to witness the girl’s extraordinary shock.

I slammed on the brakes of the car and skidded to a halt; I could see the lovers in my rearview mirror, entwined in a fragile position that I have seen formed in but two situations: after the sort of dulcet lovemaking that produces long, sonorous tones that ring long after the act itself has finished, and, as in this situation, one in which a man, in a sudden electrical bolt of comprehension and commitment, realizes that the feeling which he has declared to be love is, in fact, the love of which he spoke, but which he did not know until then could bring him to substitute the fate of another for his own. Of course, I exited the car; of course, I made sure that the girl was all right; of course, I congratulated them on their recent engagement; but throughout it all, I could not help but retreat inside myself to examine what I had just witnessed and what it was that had revealed itself to me in that instance of reality’s compassion, for here was a man who loved in a way that I had never been loved, who loved a girl who was not me in a manner I had not experienced. It was revealed to me suddenly, sitting still and in shock in the driver’s seat of the car as the heat of the sun distorted my face in the sideview mirror, that what I had just viewed was what had been missing for the entirety of my life, that the hole that this young man had torn through the veil of inevitable fate had in many ways revealed the hole whose presence I had always felt, but never noticed or understood, and now, having revealed itself to me, I can think only of where to find the needle and the thread with which I may finally sew closed this gaping whole, frayed at the edges from many years of neglect. Where this man is, this patch for the tear in my soul, I cannot know, though I do know he is not the father of my child, dearest Virginia, who for obvious reasons had some trouble arriving to class on time, for which I must apologize.

Chloë Boxer is a writer and costume designer from Brooklyn, New York, where she is cobbling together her first novel. She studied English literature, French, and creative writing at Vassar College. This is her first fiction publication.