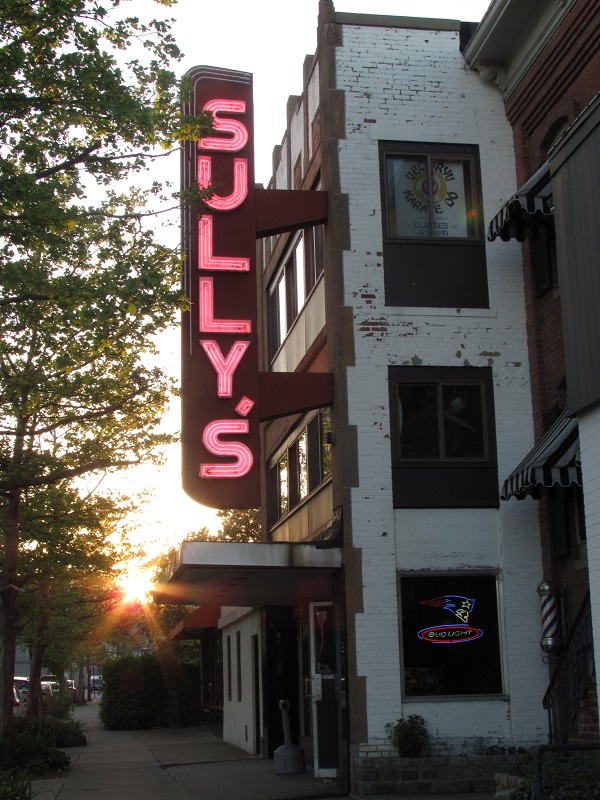 Outside Sully’s a woman clutching lottery slips and crumpled dollar bills begs me to go in and play her numbers. I’m banned from there, she says. I’m banned from every store in Quincy. When I politely decline she approaches other people closer to the door. A guy  in a white shirt comes out and in a loud voice makes believe he’s calling the police.

Oh you’re the sign guy! exclaims an old guy out for a smoke as I point my camera at Sully’s huge neon sign at sunset. He remembers me from last Friday’s photo shoot. He tells me again that the place is seventy-five years old, oldest bar in Quincy. Been in the same family all that time, the owner just died last year and there’s a plaque on the wall from the former mayor.

You’re taking a picture of Sully’s? laughs a girl walking by.

Inside it is dark but clean. A half dozen guys are playing darts. They look very serious. The bartender is fuming that a girl who just went to the ladies’ room had the nerve to show him a birth certificate when he asked for a picture ID. I order a tomato juice and he looks a little shocked, wants to dress it up. Ice? Salt & pepper? It’s great with ice and only costs a buck. An easygoing guy named Eduardo bemoans losing seven hundred bucks at some bar over the bridge. Seven hundred bucks! Down the bar a smiling middle-aged woman on a stool by herself confidently fills out lottery tickets. The girl with the birth certificate returns, says her name is Apple. Her girlfriend laughs at everything while chugging a brown bottle of beer.

A few of the darts players step outside for a smoke and a car jerks to a stop a few feet away. Three pretty Eastern European girls—one of them shockingly pretty—slide out and strut to the Fat Cat next door where they serve things like fried squid. Nice parking job! shouts one of the darts players. They finish their smokes and head back inside.