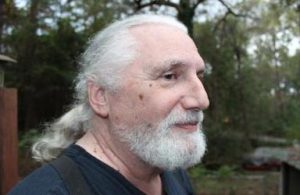 I found the old man sitting on the bottom step as I entered the stairwell. Our elevator was obviously in a dangerous mood and someone had thoughtfully placed tape over the button necessary to activate the directional key. Luckily our building is not a high-rise, but only four stories. Like many people, I wonder why floor-levels in a building such as ours are called stories. Perhaps it is because of the many lives and the stories that inevitably arise from our apartments—or what might better be called cells, not apartments, because they are rather small and spare. I had to get permission from the Committee even to put in a dishwasher so as not to aggravate my arthritis. The machine took up half of the area devoted to my kitchen after the seller helped me roll it in. Luckily I had sense enough to buy one that rolled around on casters and plugged into the kitchen faucet for water. Now I use it to store my dishes. I turned it on one evening and forgot to open the water faucet and burned the motor up.

The legal name of the old man in our stairwell was Mister Wae, even though we called him Father Wae. He had come from the countryside to the city when he was sixteen, after he had lost his parents—well, after his parents died, he really didn’t lose them—he told me.

“How are you doing, Father Wae?” I asked (actually, I shouted because he was very deaf), afraid to step over him to begin the climb to my apartment on the fourth floor. He had stretched out his leg along the step and was gently massaging his ankle.

“Just a little tired,” Father Wae responded, a bit wistfully, I imagined, worried he had perhaps turned his ankle and might need someone more specialized to help him.

“Can I help you up?” I asked, aware I could be accused of being self-serving. In fact I was hoping to get to my apartment without stepping over him, a gesture that could be interpreted as both dismissive and rude.

“I would appreciate that,” he said with his usual candor, and smiling—at me I later surmised. I was worried he could read my mind, because in fact most of my feelings are readily interpreted just by looking at the migration of expressions across my face. Unfortunately, I was capable of hiding nothing of consequence at that time.

I will not burden you describing the lost time and the struggle necessary to get Father Wae to the fourth floor. I left him sitting on the steps to the roof that rose between our apartments, and finally, finally, groped my way into my apartment—well to be honest, my rather cramped room— and I sat back into my fold-out lawn chair, the only comfortable chair in my apartment and, in fact, the only chair in my room, when I saw Father Wae’s body sail down past my kitchen (and here I exaggerate as my kitchen is, in fact, a hot-plate) window.

It was as though I photographed the old man’s face because I can to this day recall the calm, rather expectant look that I believe he showed to me and to me alone as he hurtled past my window and subsequently the final three stories of our building.

Even though our elevator continues to go kaput with some regularity, and some of our residents even more elderly than I am have asked me to help them reach the upper floors because of it, I invariably refuse.

Born and raised in Vicksburg, Mississippi, George Buelow received honorable mention for his creative nonfiction essay, “Aunt Edie,” from Winning Writers in October 2015. He has published two well-received psychotherapy textbooks, and is working on a literary thriller set in post- Katrina south Mississippi as well as a book of poetry. He has conducted anthropological research in Alaska and Liberia, practiced psychotherapy and taught at the Universities of Oregon, South Carolina, and Southern Mississippi. He lives in south Mississippi with his wife and partner of over 40 years, Sidne, and dancing rescued dog, Kelsey. They go on long distance camping trips and never tire of movies and reading aloud to one another.