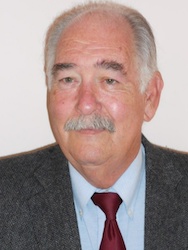 Sister Dominica examined Alain, then looked over at me. “Is his father with you, in the waiting room perhaps? It’s all right for him to be in here.”

I understood then, and relaxed. She knew nothing. There was no dreadful diagnosis she wanted or needed to tell only to both parents. She wasn’t asking where his father was, just who he was. “His father is a sailor.” The nursing sister waited, seeming to expect something more.

“Look, is something going around? Alain coughs all the time. Have the other sisters treated coughing children?” Affirming my words, Alain summoned a deep, phlegmy, chest cough. “You see? Like that, all the time now.”

“You brought him in just for the cough?”

“Sister, sometimes bad things start with just a cough. I wanted to take no chances.”

“You may get him dressed now. The cough? Simple congestion. Use any over the counter syrup that has guaifenesin. I’ll write that word down for you. Just read the label. Air in Bogotá isn’t good these days, too many cars now, too much exhaust. Modern times they say—progress. At least we don’t have all the drug problems they have up north.” She ran her hand lightly over Alain’s back and guided him off the table. “And, you’re sure about Medellin?”

Perhaps it was only the air. Outside the clinic Alain coughed three times in racking succession. “Mamma look, Italian ice. Can I have an Italian ice? Do they have cherry? Please Mamma.” Just the thought of Italian ice seemed to stop his cough and I bought him a small cherry scoop. Maybe this is all in his head—or in mine?

“A good ear, nose and throat man. That’s what you need for Alain.” My mother never lacked opinions. She watched all the television doctor shows.

“The nursing sister said it was bad air and—”

“Sister? Nuns don’t give a shit about a boy’s body. Now, collection plates? That’s something they know. They understand money pretty damn good. How can a woman who never spread her legs for a man understand children? You find a Jew. Jew doctors are smart, know how to fix things.” Mother knew all about it. The sun had risen and set on her Jew, Dr. Weismann. He put up with her for years until he finally smoked himself to death.

“He seems better. I’ll keep him inside today. Maybe it is only dirty air.”

“Right. Don’t listen to your mother. That’s how you got Alain in the first place. If you had listened to me—”

“Enough Mother. I’m glad to have Alain and I would change nothing.”

“No, no changes whatever. Your little nameless sailor boy. Sure, sure, I believe all that shit. But, I tell you his father was from Quito. There are men like that in Quito, high up in the mountains. I’ve seen too many doctor shows about heredity to be wrong, and I know there are men like that in Quito. Not exactly the seashore resort, Quito, but you can make a baby anywhere. Here, rub his chest with menthol cream.”

The menthol cream smelled nice but did nothing for Alain’s cough. In the morning it was no worse, and no better either. My aunt, who is not quite as crazy as her sister, told me about an old woman who had been born up in the Andes. She told fortunes and hexed away warts, but it was said she could draw thrash from a child by sucking his breath. It wasn’t that long a trip and my aunt took us in her car.

The woman gave us tea that smelled like rosemary, but had no taste at all. “You aunt, she told me you were to bring this boy. Is shy? He shy?”

“Alain? No he is just trying to be polite. We’ve been working on manners. He wants to please me. Very outgoing, not shy at all.”

“Sorry, I say wrong. Is modest? Bashful? I want to see naked.”

She put her craggy head on Alain’s back and pushed his shoulder blades apart with her hands. She listened for about five minutes until Alain began his impolite, restless, flitter flutter. “Heart strong. Little fast, but strong.” She ran her hands all over Alain’s body and seemed particularly interested in his nails and pinched the flesh between his fingers and toes. She stroked the skin of his ankles up and down with the backs of her fingers, and probed the base of his spine just north of sodomy. “The father, he Peru man, no? Men like this boy sometime in Peru they say.”

“His father is a goddamn sailor. What about his cough”

“Cough? Oh, I give you a tea, fix up good. But probably just bad air.”

The allergist was a very nice man, not a Jew, but obviously good at his job. His office was wallpapered with diplomas and awards. He had a soothing professionalism that wasn’t a bit cold or distancing. Alain seemed to take to him immediately, sensing the genuine interest behind his avuncular, familiar manner.

“It’s an allergy. The scratch test confirms it.”

“Thank God. I was worried about lung disease and every fatal illness I’ve ever heard of.” I was so relieved that tears welled up.

“Normal reaction, to fear the unknown. Relax, you did all the right things. This isn’t a common allergy, it’s extremely rare here, but all allergy treatments are essentially the same. First we treat the symptoms. Medication to quiet the reaction. An injection today will jump start the process. Pills every day for a week, and then a pill as needed. In your son’s case we won’t be able to easily isolate him from the allergen, but the pills will keep him on track.”

“I’ll be sure he takes the medicine. Is there no way to keep him away from the, what did you say, the allergen?”

“Don’t worry he’ll probably grow out of it, and it will stop when he gets old enough to groom his own . . . to groom himself properly. Tiny organisms that live on avian mites are the cause. His father isn’t Chilean by any chance? I ran into men . . . in cases like this in Chile.”

“I see.” The doctor tousled my boy’s hair and stroked his back affectionately. “Alain, you are lucky to have your mother’s eyes and good heart. Perhaps when you are older and more developed you will sail like your father. Well, give him the pills. Call me if he runs a fever that baby aspirin won’t reduce or if he is still coughing after a day or two. Oh, and if his wings begin to molt, even a little, bring him straight in.”

Ray Busler is a grateful old man. He is grateful for his Aunt Pearl who sat him on her lap and read comic books to him until the words began to make sense, grateful to his teachers at Woodlawn High School who taught him what to read, and grateful to his friends at The Write Club of the Hoover Public Library who encouraged him to write his own words. Ray is grateful to Melissa Libby, a talented writer and editor at Sick Lit Magazine who gave him lessons in feminism and published him anyway.

Ray is primarily grateful to his wife of forty years, Patsy. Patsy too often puts aside her own writing to help and encourage him. Ray and Patsy live in Trussville, Alabama.