She sat in her robe and waited while he adjusted the legs of the tripod, slender stick legs like those of a great blue heron. Now he began doing camera things, fussing with film and lenses, apertures and shutter speeds and light meters, and she felt the room closing in. As always when he photographed, he became cold and analytical. The qualities that once intrigued her had lost their fascination.

At the party where they met, he’d been staring at her, his obsidian eyes calculating and intense, as though seeing through her clothing, so that when he approached she expected a pickup line and waited to cut him down. But he handed her a sketch, pen and ink on a bar napkin—a drawing of her. He’d shaded her neck to a long graceful flare and her throat had become a pedestal for the bone lines of her jaw, for her forehead and nose. He had made her beautiful. In two minutes with a ball point pen.

“With the camera and better light,” he said, “natural light, we’ll discover your lines of force.” She studied the sketch, waiting, but he handed her a number, even then not asking her name. “Call during the day, early, for the morning light.” And she finally had, but within three months it led to this. Because here she was now, waiting to undress.

“Black and white today,” he was saying. “A chiaroscuro mood recreating you in dark and light with an interplay of shadow, life extending to a world beyond the frame.”

Once she’d been enchanted by his voice, swept up in the flow of its husky pulse. Although he seldom spoke to her directly, he lectured while he worked, talking to himself to create the emotion he sought to find and capture. Today he spoke of forms that would not be contained, like bent springs filled with tension, spoke of shapes that did not move but refused to be imprisoned. Today he moved his hand and pointed—an imperious gesture—and indicated where she was to stand.

“Now you must be very still,” he said, “and I’ll add energy and motion to the work. A simple woman transformed into an idea, more than you have ever been in life.”

But he was too absorbed. Ranting now, manic almost, about beauty being a standard set by the elite, talking about the painter Serrano and his work—the crucifix immersed in urine, the so-called Piss Christ—about Mapplethorpe and the Dung Virgin, about overthrowing paradigms, about artists and freedom and rules.

But his work would not be interpreted in that way, he said. His own work was art and transcended moral labels. What he was doing here would set new standards. Using her lines of force, he would echo the nipple shape in the curve and shadow of her breast, capture the texture of her flesh and hair, her nobility. And could she arch her back a bit?

In the beginning she had loved it when he talked about amateur photographers not knowing the difference between journalism and art, never achieving a point of view, never finding a way to capture the mystery and explore the special character of the individual subject. Back then she would have shrugged off her robe and said, “And what special character do you find in me?” Coquettish, flirting. But no longer.

Because today he was directing her to different poses, his voice abrupt and impersonal, his hands cold against her skin when he positioned her arms and adjusted the angle of her hips. Because he no longer was seeing her, but rather, searching for the myth he wanted her to be. Lately she’d been wanting to tell him that these images of her were temporary, only celluloid mirages, tell him that was the way he’d begun making her feel.

But still, she missed the passion, the way it once had been. And even now, she waited for his touch, ashamed to feel her need, and wondered how she could refill the hollow place of missing joy.

But when he adjusted the lens and focused the shot, she saw that he’d turned the camera and changed the light, and she would be only a silhouette. The camera clicked—a tiny sound and burst of light that froze the moment—and her lines of force were gone. 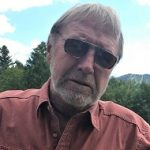 S. J. Cahill lives and writes in the Northeast Kingdom of Vermont. He has been a Ralph Nadding Hill Contest finalist and his creative nonfiction has been published in North Country Journal. He has received writing grants from the Vermont Studio Center and was a three time resident. “Lines of Force” originated while Cahill attended life-study classes with visual artists. Currently he is working on a novel and a short story collection. This is his first fiction publication.