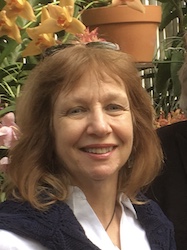 The farm came into sight as they reached the top of the hill. Nora and Alan climbed out of their red Jetta and walked across the field. They wanted to buy corn. Yet both of them wanted more, and that was never stated in their relationship.

In the car parked next to them a dad strapped his little boy into a car seat. The minivan hummed as the little boy’s mother walked toward the passenger side. She seemed unable to crack a smile, even when Nora and Alan smiled at her.

As the barren couple approached the hut a young woman advanced toward them; a man holding a toddler by the hand trailed behind.

“They’re slaughtering goats!” the young woman hollered, her face bright as the apples dangling from the trees.

Nora looked at her husband, but, as was often the case, he looked away. Sometimes she envisioned him as a Bobble head doll.

“It’s a farm,” Nora said, perhaps more to herself than to Alan. He wasn’t much for paying attention.

The boy behind the counter said, “She’s pregnant, and they were up there, apple picking. You know how women can be when they are . . . .”

Nora had never raised a child and yet she resented the boy’s remarks. Meanwhile the pregnant woman, who didn’t look bulbous at all, kept shouting as others walked toward the hut.

The young boy’s sheepish grin apologized for more than his words could ever provide. Such a poor mask for one to wear being placed in the awkward position of selling produce while a slaughter ensued.

Alan’s curiosity piqued. “Where are they slaughtering the goats? Can we watch?”

Nora walked over to a crate of peaches and scrutinized them.

“Those blemishes are from the hail storm. Remember back in June,” the boy said.

Nora rubbed her fingertips over their fuzzy skin and admired each tiny puncture. She recalled the fullness of a life nestled inside a dark warm womb, if only for a short time, if only so long ago.

“They are still good, just marked,” said the boy.

She nodded and walked over to the box of cucumbers. She gripped one after another, inspecting each for firmness. She meandered toward the overpriced blueberries and selected a pint anyway. Each plump morsel was well worth the price.

Alan wandered in the direction of the slaughter. Nora said nothing. He liked to watch, to talk, and get excited at what others did.

Nora opened the refrigerator door and gathered a dozen eggs. She eyed the melons and wondered if they were sweet. As if the boy could read her mind, he said, “Those melons are epic.”

Alan never went far. Nora never needed to call him back. He returned from the escapade carrying a Hubbard squash. He didn’t get close enough to the slaughter. Nora counted on that.

“You’d need to go way up into the field,” the boy behind the counter said. He pointed past the blueberry bushes and apple orchards. “Way up, over there.”

Alan talked and rarely acted. Nora knew he’d never venture that far into a field to witness knives wielded against the soft folds of a creature, blood gushing, guts sprouting. She imagined that Alan might faint if he ever witnessed the mess of such an ordeal. The pitch of their cries might echo forever in his sentimental soul.

Did one need to be pregnant to be disturbed by the slaughtering of goats? Perhaps one only needed to consider the process of nature.

Nora and Alan split the cost while the boy bagged the produce.

“I’m sorry about all the fuss,” the boy said as he handed over the bulging brown paper bags.

“It’s a farm,” said Nora, who had never raised a child. Yet every day she imagined what might go into growing one.

Marie G. Coleman is a native New Yorker living in New Hampshire. She teaches English at Nashua High School North. She holds an MFA from Lesley University. Her work has appeared in Pangyrus, Every Day Fiction, and Hippocampus.