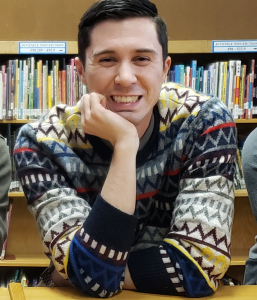 The air in the Louvre is stale, same as every Saturday. I’ve never enjoyed art, and in my youth I often hid to avoid my art professor father from dragging me to the aged museum. Ironic, really.

“Have I ever told you that you look like my cousin?”

The unsteady voice belongs to Arthur Durand, my father, and this is not the first time he has told me that. Specifically, it’s the third time this hour, 17th time today, and God-knows-how-many times this week. But Arthur doesn’t remember that, so I simply reply, “No Papa, you haven’t. I’m your son, Pierre, remember?”

He nods as if I said something obvious, but I can see the truth.

Conversations with Arthur are difficult. The doctors taught me that open-ended questions confuse him. So to avoid asking him What exhibit would you like to see today? I ask “Why don’t we go see the Surrealism exhibit? It’s your favorite.”

Arthur gently nods and I see a faint light behind his typical absent stare. I lead him by hand through halls filled with paintings from bygone eras. Once, Papa might have stopped at every corner to give a boring lecture on the meaning and history of every sculpture, portrait, or fresco. But now, all those lectures have been stripped away from him like a house being built in reverse—torn apart until only his foundation remains.

“Do you think we’ll see Atlas Delivering the New Sky?” He asks the same question every week—a ritual to call forth the man he was before.

With each step toward his favorite exhibit, awareness coalesces and gravitates to Arthur. Surrealist art—his foundation. The man I knew as Arthur Durand could squeeze profound meaning from a brick placed at an offset angle. He may not have been a doting husband or a loving father, but even I can admit Papa’s genius.

As we step into the Surrealism exhibit, his metamorphosis culminates. Surrounded by absurd paintings of fish in the sky, melting clocks, and half-completed statues, we’ve entered another world—the world of my papa—and he comes to life. He glides between the abstract works of art, and soon he is lecturing surprised patrons on the nuances of Marcel Duchamp’s Fountain—which is really just a urinal on a pedestal.

It seems today is a Good Day. He’s not always like this.

We reach the most ridiculous piece in a hall composed of ridiculous pieces—Arthur’s favorite. A marble sculpture of Atlas with an outstretched hand holding a fresh slice of pizza. The pizza gets replaced daily, and is apparently supposed to represent the “transient fluctuating nature of the human experience” as some kind of “living art.” It’s fucking pizza on a statue.

But seeing Arthur now, one could almost believe he was still the professor emeritus of his prime, that he wasn’t ill, and that he wasn’t getting worse. I absently nod my head as he continues his usual lecture script, but I can’t help but feel my cheeks get hot with jealousy. The doctors told me Alzheimer’s can take effect in unexpected ways—I was ready for that—but for my papa to remember the name of a goddamn pizza-holding-statue and not his own son!

I force myself to take a breath, and only then do I notice something isn’t right.

“And here we see Atlas holding a slice of anchovy . . .” My papa’s voice trails off.

Arthur gives me the same story about the pizza-statue every time without fail, every time. Verbatim. Until now.

My heart rate spikes. An episode is coming. I desperately grab Arthur’s hands, but we’re as helpless as two palm trees clinging to sand before the might of a tidal wave.

“No! NO! NO!” He struggles to escape from me as rubbernecking onlookers give us a wide berth. “You can’t do this to me, you can’t!”

He attempts to yank away, but his foot stumbles over the base of a red velvet stanchion. I barely manage to throw myself underneath him to break his fall. We’re a mess on the floor, both of us crying. Staring down at us is Atlas holding the goddamn pizza.

“I am the unloved art,” Papa cries. “I am the old painting damaged by time. Just stuff me in a box and set me in a closet to decay!”

Did he hear me talking to the doctors about the nursing home?

“Pierre—” For just a moment his eyes pierce me with full clarity. “My mind is broken, Pierre. I’m broken. I’m broken.”

Hearing my name spoken aloud almost overwhelms me. I look back into Papa’s eyes, and behind them, the marble eyes of Atlas holding his pizza. And perhaps—for the first time in my life—I understand.

He stops struggling just long enough for me to speak.

“Look up at the sculpture Papa, look at Atlas. Every day he holds a new slice of pizza. When that day is done, and the old slice removed, it never comes back. But that doesn’t mean tomorrow’s slice won’t have value. And no matter what slice is placed in Atlas’ palm, nothing changes the stone of Atlas himself. That’s you, Papa.”

The tension fighting against my hands ceases. I set Papa on a bench and tidy him up. He says nothing, simply stares at Atlas Delivering the New Sky. My father’s reflection in marble. All of who he was, who he is, gone to the world but still within him, locked deep in stone. Each new day of memories is a new slice, tossed at the end of each day. But that doesn’t make him any less a work of art.

George Cooksey is an active duty Air Force officer stationed in Okinawa, Japan, who enjoys writing stories in his free time. George’s story “The Melody of Irirangi” placed top 10 in the 2022 Writer’s Playground Competition, and may be found published on the Writer’s Playground website. “J is for Junichiro” placed second in the 2022 Imagine Little Tokyo contest, and is featured in the Discover Nikkei online journal.