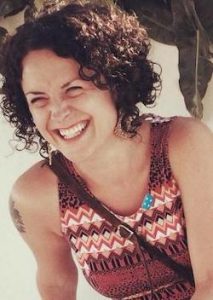 You met Uli at Miami’s Best Pizza, back when he barely spoke English, back when he punched dough like it was the face of a man he wanted to kill, some cabrón who stared too long at his kid sister, who promised her heaven and more, surrounded by the exhaust and floating plastic of downtown Managua. A week before you met Uli, your father left to start a new family in Jersey and you wanted out of the suburbs, away from the dripping fountains and too-straight lawns, away from your mother’s flat eyes and receding hairline.

Uli lived with his tío Victor in a duplex near calle ocho, in a neighborhood that never shut up, whose lawns were littered with plastic toys, kitchen appliances, and wild roosters, a place where there were a million smells, a million distractions. Because you were boys, you didn’t talk about anything real, but you recognized the anger in his eyes. All it took was one shared blunt in the freezer to create a routine: you’d take him home after work, he’d change into a guayabera and smoke you out. Once you were both faded, you’d walk across the street to Casa Lario’s, order ice-cold Maltas, ham croquetas and yucca fries with extra mojo sauce from waitresses with busted teeth, frayed apron strings lost in the folds of their fat bodies.

They’d fluff your Jewfro with their plastic nails, cursing your good luck, asking if you wanted to meet their little hijitas. You’d respond in shameful Spanish, exaggerating your dumbass white-boy accent just to hear them laugh, just to see the glints of silver and gold in their teeth. They called you el gringo guapo, and while you enjoyed the attention, needed it, it wasn’t enough. You wanted them to look at you the way they looked at Uli, like you belonged to them, like you were somebody’s son.

Dana De Greff is a writer and editor from Miami, Florida. She has published articles and stories in The Austin Chronicle, The Miami New Times, and Palooka Journal.