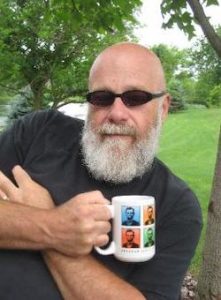 I was in my early thirties, driving home from coaching a little league baseball practice early one spring evening, my two young children/baseball players in the back seat. I was low on gas, needed to get the kids to dinner, myself to a rehearsal of Edward Albee’s play, The Zoo Story. I decided to stop at a large Shell station at a busy intersection. Although the station had several pump islands, there was a crowd, short lines queued before each island. I picked a line, two cars in front of me, slowly advanced to the pump one car at a time.

As I put my Camaro in gear and started to take my turn at the pump, a large Lincoln Continental came speeding around the corner from a side street and pulled up to the pump—“my” pump. There we sat, bumper to bumper, face to face through our windshields. From the backseat, I heard my daughter say to her brother, “Uh oh. I bet Dad’s gonna get his bat out of the trunk and hit a homerun on this guy’s head.”

I was glaring at the other driver, no doubt, and I admit the same thought had momentarily flickered through my mind. “No, I am not,” I said, “but Mr. High Roller Line Jumper and I are certainly going to have a discussion about gas pump etiquette.” I turned, gave them my best parental stare. “Stay in the car. I am just going to talk to him.”

As I got out of my car and closed the door, the guy in the pickup truck behind me stuck his head out the window and yelled something to me about the line buster that I hoped my children didn’t hear. It felt good to know I wasn’t the only person upset with the guy in the Continental.

Our bumpers, I discovered were touching, so I tightrope walked across the two bumpers to get to his driver’s side window, which was all the way up; his car was still running. The driver was probably in his late fifties, dressed in a suit, brief case open on the passenger side of the white leather bench seat, papers stacked and splayed across the seat. His hands were white-knuckle gripped on the steering wheel, his bald head rigidly fixed straight ahead, his face apoplectic red, veins bulging on his forehead and temples.

I tapped on his window; he ignored me. I tapped again. He ignored me again. I tapped a little louder, said, in a controlled voice, “What’s your deal here? It was my turn. You line jumped, cut in front of me and the other people who were waiting.”

I paused, but there was no reply, no acknowledgment I existed, let alone mattered. There was no movement, no change in body language. I tapped on the glass, said, “I teach communication. I can’t talk to you through a barrier. I need eye contact. Put the window down. Please. Put it down.”

In a few seconds, he moved his hand to the window button and lowered the window a few inches.

He still did not look at me. He simply stared straight ahead.

“Thank you. But could you lower it some more…please.”

After a few seconds, the hand slowly moved again. The window went down a few inches.

“Take a big risk. Lower it all the way. Have a little trust.”

It took a while, but the hand moved, the window went all the way down. He still stared straight ahead, hands on the wheel. “I just want to know what gives you the right to avoid waiting in line like the rest of us. What makes you so special?”

I paused, looked at him; there was still no change in his affect. I looked around to see if my children were still in the backseat. They were, but leaning over the front buckets for a better view. I also noticed two or three people standing and observing.

What happened next was totally spontaneous. The play I was rehearsing, The Zoo Story, has a scene where two strangers meet in a park and argue over who has the right to claim a park bench as his own. The bench is more symbol than park bench, but humans, it is well documented, argue about the strangest things (such as the right to pump gas). I suppose all this was rattling around in my head, at some level of consciousness.

Without conscious effort, I began to paraphrase some of my lines from the play, simply substituting the words “gas pump” for “park bench.”

“Tell me—do you know how ridiculous you look? And tell me, this gas pump, this metal and glass and rubber, this small space of concrete, the right to pump gas before the other guy—are these the things men fight for? Tell me, is this your honor? Your dignity? Is this the thing in the world you’d fight for? Is this what you would be willing to die for? Can you think of anything more absurd?”

As I finished this paraphrase of Jerry’s lines, without thought or premeditation—it was simply and purely instinctual—I slowly extended my hand through his open window into the space of his car. I placed my hand firmly over his left hand on the steering wheel. After a few seconds of silence, I said softly, “Pump your gas and get out of here please. Then I can take my rightful turn. I have a life to go to also.”

I turned to walk to my car when his voice suddenly broke the silence, froze me to the concrete. “You are right…about everything. It was your turn…and those behind you. I know that. I just bullied my way in. That’s how I live my life. I use people—my business partners, my wife, my kids, my clients, even my mistress. I use people. I walk all over them. No one ever confronts me. I need to change. I really need to change. I no longer like myself. I haven’t for a long time.”

I turned, looked at him. As I stood staring deeply into his eyes, he into mine, he began to cry. Streams of tears ran down his face. He reached down, put his hand on the shift lever. As the window began to close, he looked at me, said, “Thank you…thank you. I am going to be different. I’m going to change. Again, thank you.” He put the car in reverse and left the gas station much slower than he had entered a few minutes earlier.

I stood there a few seconds before I finally returned to my car, pulled up to the pump, bought gasoline. I was numb. I don’t recall what I said to my children, I don’t recall if anyone else said anything to me. My entire focus was trying to process and understand what had occurred. I knew it was an extremely meaningful moment in my life, in the man’s life, what writer James Joyce referred to as an epiphany. But the precise meaning was nebulous, unfocused. I struggled to wrap my mind around the significance of the few minutes that would provide meditation material for a lifetime.

I am still engaged in that process of trying to comprehend the meaning of what took place that day. I have spent many hours over the past thirty years thinking about it. I wonder where the man went, how his life changed, if at all. I wonder if anyone else who witnessed the exchange felt its impact. I know with certainty I never buy gas, never pass a Shell station that I don’t get lost in thought. I laugh at the stupidity of youth, how dumb I was to confront him, touch him, invade his personal space. I sometimes shared this story with college classes and workshops, often joked I later had visions of him driving off with my arm snagged in his window, me running down Oak Park Avenue beside his car. In this more-violent era today, it would be even more reckless. I probably would be shot.

No doubt, the story of Peter and Jerry in Albee’s The Zoo Story, and the story of Randy and Mr. X at the Shell station carry significant messages beyond the folly of youth, the testosterone-fueled defense of some object or place which has been deemed symbolic. We never know the impact we might have on another person’s life, the significant impact of a simple action, such as stopping for a tank of gasoline, of connecting—no matter how briefly—with a stranger. We never know how our actions impact and change our own lives, often without anticipation or expectation.

I have often heard it said by folks older and wiser than I that the events which would shape and change my life would occur in the least likely of places and at times totally unexpected. Those folks were correct. I only hope to become one of them someday. Although I am definitely older, the wiser part is most likely still up for debate.

(Paraphrased lines from Peter’s comments to Jerry are from memory. The edition I taught was Edward Albee: The American Dream and Zoo Story. New York. Signet: 1961.)

Randy DeVillez is a retired college writing and literature teacher, poet, writer, and art roadie (for his wife). He has recently published poetry in Ardent and nonfiction pieces in Art Times and Fine Lines. He has poetry and nonfiction pending publication in Main Street Rag, The Writer, Fine Lines, and Fate. His textbook, Writing: Step by Step, has been in print since 1976.