He skillfully stepped over the rail onto the ledge of the bridge, the water rushing below. No need to jump, he thought, just lean outward and fall, and soon enough the water would come—an anodyne for his loneliness, and the muted panes of glass through which he experienced a joyless world. And so he leaned.

Not too far upstream she pressed against the ferry’s rail. Her world was not muted at all, her reality relentless shards of glass. She couldn’t just fall though—the illusion remained that there were those who still cared holding on. She needed to break free from this phantom grip; she needed to jump. And so she jumped.

These events occurred a few minutes apart, and as they both descended below the water line, their world started to fade, just as they had planned. But then something grabbed them with a jerk—a violent undertow—and much to their dismay, they were back.

This wasn’t an ordinary undertow, but one that pulled its subjects deep into the water to an underwater cave that had not been visited for over one thousand years, since its creation. But as luck would have it, the cave would have two visitors today.

His head emerged into the cave from one of the pools of water that communicated with the outside, gasping for breath. She broke the surface a few minutes later. They pulled themselves up and out, and sat on the floor, sulking. Both were angry that they were still alive; and not only that, they were not alone.

They soon realized the cave was actually a relatively pleasant place—it was warm, lighted, and had abundant air. There were no apparent sources for these amenities, but they realized there was no need to waste time questioning these things or how this place came to be. There was spelunking to be done.

They ignored each other as they began to explore. In addition to the main room—which was expansive and had a cathedral ceiling—there were innumerable passageways to multiple smaller enclaves. Each enclave had something unique to offer, such as orbs of energy and light, musical vibrations, and rooms of pure color.

For a long while they continued this solo exploration, but as they happened to pass each other more and more, they began to exchange small talk. Eventually this led to more significant exchanges, and soon they were spending more time together than alone.

They decided that they should join forces and use the main room as their base. They set up two beds, one on either side of the room and called it home. As time passed, the beds inched together slowly, until eventually they were one. After that they spent as much time exploring their minds and bodies as they did exploring their world.

One day they were playing a game as they were prone to do, tossing stones toward the center of the room, attempting to make their throw as close as possible to the last stone to land. The stones began to pile up. They looked at this pile and they both had the same thought: gather stones and add to the pile, not by tossing them, but carefully placing them with the whole in mind.

They continued working a little bit every day. As the pile grew, they put even more effort into working their stones’ intricate complementary shapes into tight pleasing fits. It eventually grew many feet high, to the point where neither felt safe to climb. There came a moment where they both stopped building and looked at each other: it was done. And it wasn’t just a muddy abstract pile of rocks: it was a statue.

At first glance it didn’t seem like much, but as they walked around holding hands they could see it wasn’t just one thing, but a variety of creatures. At one angle it was a bust of a bear, but move slightly over and you could see a dolphin rising from the waves. And as they circled a snake revealed itself in the grass, followed by a howling wolf under a blood moon, segueing into a pair of songbirds in an embrace.

This continued. And as they completed the circle and took in all they could see, they looked at each other and began to cry. Slowly at first, but soon the tears began to fall with the force of a waterfall. Through the tears they kept their gaze into each other’s eyes and were oblivious as the water began to rise above their ankles.

The flow continued unabated, engulfing them in a warm sea of tears. They floated toward the ceiling in each other’s arms. They continued to rise, and soon they were above the statue. Finally, their heads encroached the ceiling. And as the room filled completely, and there were no air pockets left, they kissed and became one. And they were both able to finally do what they set out to do: drown. 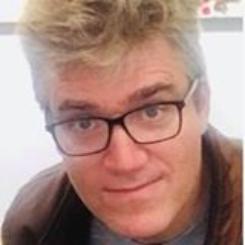 Michael Devine works as a hospital pathologist in Detroit. He self published his first collection of darkly humorous short stories and flash fiction this year called Monkeybait. He is working on his second collection titled Voodoo Chicken which features elements of horror, magical realism, Bizarro fiction, and poetry. As a self-taught artist he has participated in numerous shows in the Detroit area and has curated over 30 large group shows.