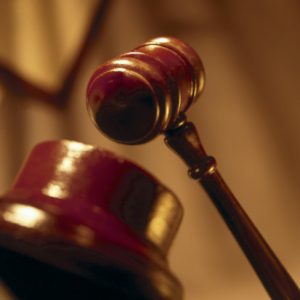 I know your type. You’re one of the Korean brides plucked by GIs near the Demilitarized Zone and brought to America. Some of the men have made good husbands, like those married to the women I teach English to here in Ohio. You’ve been divorced, though, and hustled men for a living. Now you’re on trial, making it necessary for me to translate. May the Year of the Snake, 1977, prove lucky for you.

The judge swears me in. “Do you swear to interpret in a language that the witness will understand, and then back to English, so help you God?”

As I look at you, my aunt’s face, her widow’s peak as distinct as yours, floats into my mind. She worked in a wine house, selling wine and more to men paying her price. As a child, I visited her and saw them. The air smelled of something sweet but upsetting.

You hold your chin up, your lips plump and red, what people used to call “the mouth of a cat that just ate a mouse.” Your hair’s bleached blond and permed. I’ve no makeup on my face and my hair’s in a schoolmarm’s bun, my breasts swilling with milk for my baby girl, whom I’ll nurse during the recess the judge promised.

“You will not be offended by the language we may use?” the attorneys asked before I was led to the courtroom.

“No,” I said, wondering how bad it would get.

The prosecuting attorney plants himself before you.

“Miss Chin, how long have you worked in the Ho-ho Massage Parlor?”

“Miss Chin, have you met Mr. James Callahan?” The lawyer gestures toward a man in a suit standing below the podium, his hands a fig leaf.

“Ne,” you say and snap your gum. The bailiff hands you Kleenex and makes you remove the gum.

“Yes,” I interpret. This job’s a piece of cake. I relax my back muscles.

“Miss Chin, how many times had Mr. Callahan used your massage service before June nineteenth?”

“On June nineteenth at the Ho-ho Massage Parlor, did you say to Mr. Callahan, ‘Want a blow job?'”

My head X-rays itself in search of a translation. Nothing comes up. It scans again. A — blow — job. The eyes of the judge, lawyers, and jury turn on me. I’ve lived away too long from my motherland to have picked up that vocabulary in my native language. Even while I lived there, which was until my graduation from a Catholic college, I don’t recall wandering into that area of vocabulary. I don’t mean to sound holier than thou.

A smile steals across your eyes, telling me you know enough English to understand what the lawyer is asking. Why then am I here? Have you claimed not to speak English in order to manipulate a favorable ruling?

I use twenty words to describe the two spoken by the prosecuting attorney.

The jurors swing their glances from your breasts, testing the limits of your orange knit top, to mine under my gray suit. I can’t translate that, but I must. I’ve taken the oath. If you did indeed offer a blow job, and, if Mr. Callahan didn’t want it, why didn’t he just walk away? Why did he report it, drag you here, and put me and the court through this? He holds his face like a yoga instructor. Shouldn’t funds being spent on a court proceeding like this go to solving real crimes, like rape and murder?

I wish you weren’t guilty. I wish my aunt hadn’t been a wine house woman.

I’ll go to jail. I won’t be able to nurse my baby.

“Miss Chin, have you seen the penis of Officer Callahan?”

So Mr. Fig Leaf is an undercover agent.

I think a moment. You’ve used several words. I must try to match the length.

“Miss Chin, did your mouth come in contact with Officer Callahan’s penis?”

I feel hyperventilation tightening my chest.

After the war ended, as a six-year-old, I saw a whole platoon of women like you waltz along the downtown streets near the DMZ, where my mother ran a sweater shop. Their hips played hide-and-seek with the street lights, dresses looking painted on them, every ample curve and dimple up for sale. On the arms of foreign soldiers, they jangled their GI-bought bracelets and batted mascara-laden lashes asking for more gold jewelry.

Shoe shine boys yelled after the GIs. “Yankee, shoe shine. Number One shoe shine.” The white, and some black, soldiers smiled at them and spoke a language that sounded like gibberish: “Sholla, sholla.” One of you shouted to your fellow Yankee princesses. “Looks like our boyfriends will work us hard tonight. Expect to sweat a bucketful!”

The lilac perfume you left behind made me dizzy with longing—I wanted to grow up just like you, earrings blinking like stars.

“All rise,” the bailiff calls. The collective shuffling of shoes against the marble floor sounds like a church processional.

The judge marches in, and the gavel knocks. The jury foreman reads the verdict. “The jury finds Miss Chin not guilty.”

When I shake your hand, you don’t thank me. You shove a fresh stick of gum into your mouth and strut away.

Milk lets down in my breasts. I mouth a wish: May you not be caught selling blow jobs again. If you are, may you run into another translator as sloppy as I. 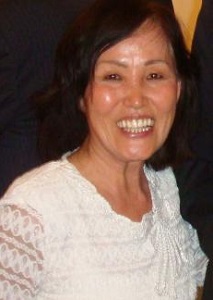 Korean born writer Maija Rhee Devine has published her fiction, non-fiction, and poetry in numerous literary journals and an anthology including Boulevard, Michigan Quarterly Review, North American Review, and The Kenyon Review. Her first novel manuscript, The Voice of Heaven, about a South Korean family’s perilous journey through life imbued with Confucian morals and values, is with an agent in New York.