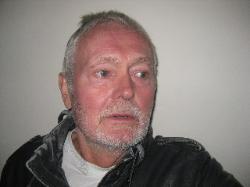 Michael left his flat at six-fifteen this morning, the same as every morning, except this morning wasn’t the same as every morning because of what happened last night. His top lip was discoloured and twice its normal size and his front teeth still hurt. And yet it wasn’t the physical discomfort that was troubling him as much as the trauma of having been mugged. He had thought of nothing else since it had happened and he needed to get to work to tell someone about it. He had to get it out. But although he wanted and needed to talk about it, he knew he wouldn’t be able to tell anyone what had really happened. If only he didn’t have to keeping thinking about it.

After working late the previous day, he had been sitting on the almost-deserted train into town. Rush hour was long-since over and it was dark. He noticed the two hooded youths looking at him from the platform and he breathed a sigh of relief when they boarded the next carriage along. Once the train was moving, however, they came into his carriage. Michael shut his eyes, hoping they would ignore him if they saw he was asleep.

He heard them coming along the carriage. Then he heard them stop. His heart was thumping but he kept his eyes tightly shut. One of them sat next to him. The other one sat opposite and kicked Michael’s feet out of the way. He had no choice but to open his eyes.

‘All right, boys?’ he said, trying to appear cheerful. They looked at him without speaking. This was what he had always feared. He hated getting the late train back from work, but the contractor was under pressure to get the job finished and Michael found it difficult to resist the overtime. He often tried to persuade Graham, the other painter, a six-foot Glaswegian who would frighten anyone, to stay and take the train with him – but Graham never worked late. Neither Graham nor anyone else was with Michael now. He was alone except for two youths and they weren’t there to be friendly.

The one sitting uncomfortably close to Michael, said, ‘What’s that disgusting stink?’

‘Smells like shit to me,’ the youth opposite said, cleaning his nails with the pointed blade of a knife.

With a churning in his bowels, Michael turned to look out of the window. He had to clench his fists in his lap to stop himself shaking. He would have liked to have moved to another seat, but he was too frightened; besides, he knew that his legs would buckle if he tried to stand up. He was praying that someone else would come into the carriage. He wondered if the youths would let him get out at the next stop. It couldn’t be more than a few minutes before they got there. It wasn’t his stop, but he didn’t care – he just wanted to get off.

‘Hey, look,’ the youth next to him said, raising his arm to point out of the opposite window. Michael automatically turned his head and as he did so felt the full force of the youth’s elbow in his face. Reeling from the shock and pain, he put his hands to his mouth and tasted blood. His eyes had shut in reflex to the pain – and he kept them shut. It was the only way he could deal with what was happening. He was aware of hands searching his clothes. They were like rats running over his body, scurrying under his clothing, diving into his pockets. His whole body was shuddering in fear and disgust. It was all he could do not to whimper.

The violation ceased as quickly as it had begun. The train had stopped. He heard the youths running away, laughing. Michael waited a long time before opening his eyes. The train was moving again. Two women were sitting with their backs to him further up the carriage. There was no sign of the two youths. Michael checked his pockets. They had taken his wallet and his mobile phone. He fought back the tears as he relived the horror of the hands running over his body.

He was still shaking when he got off the train. He barely made it back to his place. His lip was split and bleeding and one of his front teeth felt loose. He didn’t want to be alone. He needed a drink. He picked up some money and went to a local bar. He bought some cigarettes at a machine and ordered a large whisky – even though he hadn’t smoked for nearly five years and rarely drank spirits. He stood outside and smoked two cigarettes in quick succession. Then, while ordering a second whisky, he tried telling the young barman about what had happened, but the barman merely shook his head and shrugged as though it was of no consequence.

Having smoked nearly all the cigarettes and drunk far more than he was used to drinking, Michael slept badly and awoke with a hangover as well as feeling sore and traumatized from the mugging. He would have liked to have stayed in bed, but he was needed at work – and he needed to tell the lads about being mugged.

He got to the station the same time as always. He was relieved that there were other people on the train. Even though it was daylight, he wouldn’t have wanted to be in a carriage on his own.

During the journey he thought about how and what he was going to say to the lads. He didn’t know whether to start straight in telling them about it as soon they got there, or wait until the mid-morning break when everyone, including Tony, the boss, would be in the tea room. He didn’t think he could wait that long.

As usual, he was the first to arrive. He changed into his overalls and filled the kettle. Then he just sat there, with his heart beating too fast, waiting.

The others began to trickle in a little before eight. Dave, the electrician, and his mate were the first. The plumber arrived at the same time as Graham; they were talking football. When Ray, the labourer, came in, he told everyone about a television programme he’d seen. Michael didn’t join in any of the conversations. He was drinking his second cup of tea when Graham gave him the opening he had been hoping for.

‘Not really, Graham. I had a nasty experience going home last night.’

‘What was that, Michael, some old tart get fruity with you?’ Dave, the electrician, said.

Michael stared at him and waited for the others to stop laughing.

At last, everyone was looking at him, waiting to hear about it.

‘It’s not the sort of thing I joke about, Graham. A couple of kids jumped me on the train.’

‘Go on, what happened?’ the electrician’s mate asked.

Michael told them how the two youths had attacked him while he’d had his eyes closed.

‘I thought you looked a bit different,’ Graham said. ‘Your mouth’s swollen, innit?’

‘Did they get anything, Michael?’ Ray asked.

‘The little bastards,’ Dave said. ‘You were lucky not to get cut.’

‘I would have given them a bloody good kicking if I’d been there,’ Graham said.

‘I dunno, Graham,’ Ray said ‘You have to be careful with kids today; you never know what they might pull. You don’t know what they’re on, do you?’

They began discussing mugging in a more general way. They weren’t talking about what happened to Michael any more. They seemed to have forgotten that it had happened to him. Then someone mentioned work and they began drifting out of the room. Michael was the last to leave. He felt dissatisfied, even cheated. He went upstairs to the room he was painting and closed the door.

Later, Michael heard some laughter in the hallway and Tony, the contractor, burst into the room with the electrician and his mate.

‘Michael, what’s all this about you being mugged?’

‘What can I say?’ Michael said, glaring at the electricians. ‘It’s no laughing matter, being attacked by two kids with a knife.’

Dave looked at his mate and pulled a face.

‘You don’t need to tell me,’ Tony said. ‘The same thing happened to me a while ago, except with me both of them had knives. I thought my number was up, I can tell you. I’d been having a drink in the Old Eagle in Camden Town. I suppose I’d had a few, but I wasn’t pissed or anything…’

Michael frowned. He couldn’t understand what that had to do with him getting mugged on the train. But that was typical of Tony; all he cared about was himself. And he was always telling far-fetched stories. But why did he have to do it now?

While Tony was talking, Graham sidled into the room. Graham always made a point of listening to Tony’s stories.

‘What did you do?’ Graham asked.

‘I got one of them with a right-hander, didn’t I? But that’s when they brought out the knives. I thought I was done for. And I would have been, if I hadn’t remembered a trick an army mate had taught me. You know what I did?’

Michael was shaking his head.

‘I dropped down on one knee and grabbed both of them by the goolies – one with my left hand and the other with my right. They were squealing like stuck pigs. There was no way they were going to use their knives when I had them like…’

‘Shut up!’ Michael shouted, throwing his paintbrush to the floor. ‘For God’s sake, shut up.’

Tony’s mouth dropped open. The others stared at Michael in disbelief.

‘You’re so full of shit. You’ve no idea what it’s like to be mugged. Everyone knows you’re talking shit – and I know it more than anyone because I’ve been there, I’ve been mugged, I’ve been humiliated by those bastards. That’s what it is, humiliating.’

Tony and the others were too stunned to speak. Michael wanted to shout some more, but he couldn’t think what to say. So he pushed his way out of the room and slammed the door behind him. He stood outside on the landing for a moment, trying to stop himself shaking. That’s when he heard the burst of laughter. He couldn’t believe it. They were laughing at him. Even Graham, whom he considered a friend, was laughing.

Michael bit his lip in an attempt to keep back the tears. He went downstairs to the tea- room, picked up his coat and bag and made for the front door. As he went down the path, he heard someone calling his name from an upstairs window – it was Graham – but he didn’t look back.

It was a long walk to the station. Michael began to have doubts about whether he had done the right thing in leaving like that. He wished he had responded when Graham had called him. It was too late now.

He waited five minutes on the deserted platform before he heard the train coming. His whole body went rigid at the sound; all the horror of the previous night returned. He dreaded the thought of finding himself in a carriage on his own. But what else could he do? He couldn’t go back. In his fear and loneliness, he felt like throwing himself in front of the approaching train. On thinking about it, he moved to the edge of the platform. As he looked down at the track, he saw two enormous rats running between the rails, away from the train. His body convulsed in a spasm of horror.

Mel Fawcett lives in London. His stories have been published in many magazines, ezines and anthologies, including 34th Parallel, Skive, Stand, Gold Dust, Smokebox, and The Delinquent.