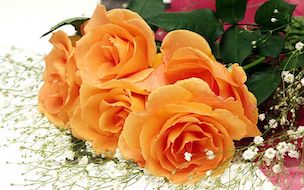 He stood in the doorway of my flower shop for some time, looking shy, his boyish teddy-colored hair sticking up all over as he mussed it nervously. I had many years on him and considered myself wise and patient, so I busied myself at the desk until he worked up the nerve to approach me. “I need some help,” he said. Of course you do, I wanted to tell him. You’re a man. But instead, I gave him a sympathetic smile. “That’s my job,” I told him. “What do you need?”

He explained that there was a girl in his class at the university that he’d like to take to dinner. Her name was Summer, he told me, and she absolutely adored flowers. “Well, you’ve come to the right place,” I assured him, and I set about doing what I loved best. As I worked, the boy relaxed a little and started chatting with me. He described Summer in the hyperbolic, obsessive detail of an infatuated child. There was an eager glow in his eyes. Lucky Summer.

I thought I’d seen the last of the boy when I sent him away with a bouquet of pink and orange daisies. However, as I was filling Valentine’s Day orders, frustrated that I needed my spectacles to make out the words, I came across a unique request for fragrant lilacs addressed to a girl called Summer. Only a few months after that, the boy dropped by to order tulips, then sunflowers, then an obscure tropical flower we had to ship in from Fiji. The boy became a regular customer, though he wasn’t much a boy anymore. He was a bit taller and less soft, with the wild glow in his eyes refined to a responsible sort of ambition. He told me all about his career and his family, but mostly he talked about Summer. He could go on for ages as I worked with a particularly finicky bouquet, never running out of wonderful things to say about her. He was cross in love, the poor soul, but he was amiable company, and he didn’t seem to mind the slight shake in my hands or the fact that I had such trouble hearing him. We simply enjoyed each other’s company.

It was only a matter of time, really. The crisp day in September when the boy sidled into my shop in a pressed suit and ordered a vase of white roses, I knew. Sure as my achy knees could predict the weather, mere weeks later we were filling a gargantuan order for an orange blossom-covered wedding reception. It was bittersweet; I was finally forced to hire a few college students to help me keep up. But my joy was not at all dimmed when the boy stopped by after the wedding, simply to show me photographs and spread his happiness.

Over the years, the boy’s visits did not cease. There were bouquets of lavender for anniversaries, chrysanthemums and gardenias for congratulations, poinsettias for the holidays, and a whole display of peonies on the birth of their first child. As I was getting older, the boy seemed to be getting younger, brimming with satisfaction each time we met. Even as my fingers ached and stiffened when I arranged, I had the thought of my boy and Summer in my mind, and somehow it was a comfort, a promise that there was good left in the world.

Business suffered. People didn’t want to buy flowers anymore. Except the boy, but he had changed. At first, I thought the sadness of the shop unnerved him, but I began to wonder if maybe something was wrong. The light still shone from his eyes, but he looked weary, and some days the chatterbox said almost nothing. He noticed my problems, though, and he put a great effort into trying to cheer me up. With no warning, he stopped coming. There was an abnormally long period of no contact, no word, no orders addressed to Summer. Oddly, I missed him so much it became another ache.

I couldn’t help it. I desperately hoped the boy would come back, but he did not. I waited, but soon it came time for me to retire. My own bones protested each time I took a step. I sold the shop and stayed for only a few more weeks, drawing it out, irrationally hoping that the boy would return. Still he did not. On the last day of my time at the store, it was raining. In late afternoon, the bells over the door chimed, and I looked up eagerly. But it wasn’t my boy. It was a woman, aging but beautiful, with raven-black hair and dark eyes. Her face was solemn. Behind her was a small girl, cowering in her shadow. They were both dressed in black. It wasn’t funny, but I felt an odd amusement at the irony. The last order I filled would be for a funeral.

At the counter, she explained that she wanted a wreath of white lilies, modest but beautiful, to display on a tombstone. “Of course,” I said. “What is the name on the order?”

At the name, the little girl looked up, and her wide, trusting, sad eyes met mine, glowing. Though we’ d never formally met, I knew her. Caroline. My boy’s daughter. She was prettier than her pictures.

I knelt down to her level, ignoring my pains. “Caroline,” I told her, “your daddy was very special. I’m sorry.” She nodded earnestly, glad someone understood.

Summer peered at me closer, comprehension dawning on her face. “You’re the flower woman!” she exclaimed. Then she sobered, glancing down. “My husband loved you very much.”

I swallowed. “I loved him also,” I admitted, my eyes pricking. “And he loved you more than anything.”

Summer lifted her daughter and cradled her in her arms. Tears choked her voice as she said, “I know. Your flowers just kept coming.”

Kelley Gregg was born in Dayton, Ohio. She is currently a student at the University of Notre Dame and writes in her free time. This is her first published story.