WE’RE ALL IN THIS TOGETHER 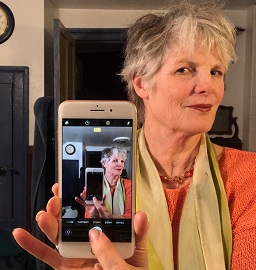 When Ruthie Clarke had a last minute cancellation in her schedule, she collapsed on the sofa with her iPad. The hell with catching up on billing—she needed a mental health hour of her own. Her years as a therapist had taught her the best medicine she could give those in crisis was her presence. Her unwavering presence. But what did that even mean these days? How much presence could be had through a computer screen? And yet the demand was never greater—current patients, former clients, new referrals—everyone was a hot pandemic mess. She’d switched out the guestroom for an office, creating a backdrop of diplomas and books, but something was missing. She made a masked dash back to her old office for a print she’d had for years, We’re All In This Together. Now her motto was the world’s, plastered on billboards up and down the empty highways.

She scrolled through the day’s news, avoiding catastrophes of all sorts—viral, political, or climate related, sifting out almost everything, and before she knew it she was reading the obituaries. It used to be a single page. Now it was a section. She did not swipe through these. The dead deserved respect, so many having had to die alone, leaving her and her colleagues to deal with the family wreckage of shock and unresolved grief. She scanned the names, noting age, gender, occupation, and the death itself, her eyes hunting for the words “pneumonia,” or simply “lost to coronavirus.” She began to drift in the stream of universal human sorrow, where she’d led so many grieving patients, helping them carry the love they felt for the dead, and through that love help them discover the strength to carry on alone.

Enough. She could not start the next session all tear-stained. But just as she was about to power down she saw a familiar face. Gizela! A former patient. Ruthie closed her eyes and prayed it was not suicide, a solution that had always been on the table. Gizela was born in Czechoslovakia, and was five years old when her mom hanged herself in the family orchard. Apparently, with such deaths it was customary to chop the tree down with the body, and the father said: Did she have to hang herself from our best one? An aunt swept Gizela up and took her to America, leaving the father behind with his ragged stump.

Like many immigrants Gizela was encouraged to put her past behind her. She received an education in the arts, got married, and had a baby, Hanna. But the past will only stay put for so long. Gizela began sleeping around, trying to fill the empty space inside where her mother used to be, resulting in a painful divorce. The father successfully sued for custody, claiming she was a slut. Gizela wished him dead, and within a year he was, crumpled like bloody tissue in a car crash. Hanna was with him. Gizela believed she killed her daughter with her promiscuity, in the same way—as so many children of suicides believed—she thought she’d done something that sent her mother into the orchard.

Gizela spent years in a very dark place, but when she began to have fantasies of killing someone, anyone, to relieve the pressure, she finally sought help. Ruthie hardly knew where to start. She did not think Gizela was a real threat to herself or others, but irrational beliefs could be nearly indestructible. Gizela refused both hospitalization and drugs, and so they talked. And talked. How to live with crippling psychic pain? How to separate violent thoughts from reality? It was heavy lifting, but Gizela was curious about herself and the mind, taking copious notes. Ruthie liked that in a patient. Together, they created a new narrative for her life which blamed bad luck, not herself, for the deaths. They discussed how great loss could be transformed into a life of meaning. Gizela began volunteering with immigrant children at a detention center, doing simple collage projects. It led her to a passion for mosaics, creating something whole from broken pieces. Art can’t bring the dead back to life but it can sometimes heal wounds. Beyond that, she came to see that not all wounds needed healing and not all scars were ugly.

Two years into their work, Gizela announced she was ready to go it alone, and that was that.

Ruthie opened her eyes and read the obit. Not a suicide, but the coronavirus. A relief of sorts. Suicide would have felt like a failure on Ruthie’s part, but it was so sad Gizela died as she was starting anew. But wait. She left behind a loving husband of forty years? Two living adult children, not one dead one? Born in Czechoslovakia, yes. Photo, yes, it was definitely her. Ruthie wondered if some stranger had written the obituary, someone who hadn’t known Gizela at all. It was chaotic times in the funeral biz after all. She went to the memorial site to find out more, and there was a personal message posted by Hanna, the daughter she’d been told had died. “As many of you know, right before my wonderful mom got Covid-19, she signed a contract for her first book, a psychological thriller. It meant the world to her. The heavily-researched plot follows a therapist who can’t see that her patient is a sociopathic murderer. Mom even went into therapy herself to learn about the process. In lieu of flowers for a funeral we can’t have anyway, we ask that when it’s released in a few months you purchase a copy of We’re All In This Together in her memory.”

JoeAnn Hart is the author of Stamford ’76: A True Story of Murder, Corruption, Race, and Feminism in the 1970s (University of Iowa Press, 2019), a true crime memoir. Her novels are Float (Ashland Creek Press, 2013), a dark comedy about plastics in the ocean, and Addled (Little, Brown, 2007), a social satire that intertwines animal rights with the politics of food. Her short fiction and essays have been published in a wide range of literary magazines and anthologies, including Prairie Schooner, Solstice, The Sonora Review, The Woven Tale, and Black Lives Have Always Mattered. Her work, which also includes articles, essays, and drama, often explores the relationship between humans and their environments.