FAMILY ON THE PATH TRAIN 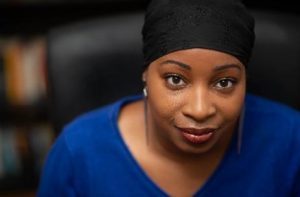 Say the dad was a gigantic dude, a Sasquatch
motherfucker strong enough to strip
Godzilla’s spikes from his back; capable
of crushing cranium between his teeth
without having to let go of the safety
rail. Say his eldest son was Satan the Second,
a schoolboy able to sink ships and cause
worldwide destruction with a single thought.
Then Sasquatch palming his son’s head
and bouncing it like a basketball
against those hard-plastic seats
makes sense. Say we commuters
were forgetful this morning—we left our eyes
on the kitchen table, next to a cup
of coffee, dropped our voices somewhere
on the subway steps; we never picked
up our blue capes from the cleaners
or removed our exorcist
ejectors from their boxes. This makes our inaction
inevitable. Say we also ignore the mother
and toddler brother; she remains a stoic
stock-still robot incapable of movement
without the on-command. The toddler
is the only one that moves.
He sucks his thumb, waiting

Sakinah Hofler is the 2017 winner of the Manchester Fiction Prize. Her work has appeared or is forthcoming in Mid-American Review, Hayden’s Ferry Review, Philadelphia Stories, and elsewhere. A former chemical engineer, she’s currently a PhD student and an Alfred C. Yates Fellow at the University of Cincinnati.