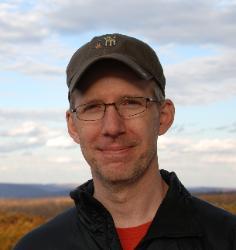 The restaurant was empty, the lunch rush over, and I was buffing down tables in hard circles—Ryan had just moved in with some stupid cow he met at a club—when a heavyset middle-aged woman sporting gigantic shades came in. We closed fifteen minutes ago, but apparently Vance, the manager, forgot to lock up. Or, more likely, couldn’t be bothered. I glared at him, but King Vance just waved his hand—serve her, wench!—and went back to his “paperwork,” which really meant his new smart phone.

I smiled as I walked up—Ryan said people tip sweet young things, not cranky ones. Words of wisdom from a twenty-two-year-old cheater. But I could use the money, since our place—my place— was probably empty by now. She turned her head and said, “You won’t believe what came in the mail today!”

She cut me off with a raised finger, then aimed it at the phone buried inside her inflated, tiger-striped hair. She was well dressed, wearing lots of bling, and I bet she was glaring at me behind those enormous bug-eyed sunglasses. Ryan had a pair like them—I told him they were ladies’ glasses and they made him look gay. I almost laughed, except I wanted to claw both their eyes out.

“Yeah, how’d you know?” she said loudly. She plucked the menu from my hand and tapped on Diet Coke a half-dozen times, her French manicures clicking emphatically. “What? No, I’m working. I just got the email confirmation—yeah, they do that now. They leave the box. What? No, by the front door.”

When I brought her soda, she repeated her staccato nail tapping, this time on Cobb Salad. “No ham!” she hissed, then threw her head back and laughed. “Right! They are much better as a pair.”

I pulled a Cobb from the cooler, plucked the ham chunks, and dumped it on a plate. She frowned when I set it in front of her. “A new one? Honey, they don’t make them like they used to.”

I went back to buffing tables. I didn’t want to listen, but she was loud.

“No. For one thing, they have different mounts. Now they make everything in China.”

She was talking about jewelry—which Ryan never bought me. He said it’s a waste of money. But his precious flat screen wasn’t, or his PS3, or his fancy drinks at the bar where he met that slut. I buffed mercilessly.

“Oh for the love of—just a sec, Jan—waitress! Waitress!” She pointed her fork at the salad, bunching her face like it was roadkill. “I said no ham!”

I took the salad in back, plucked out the microscopic fleck of ham, and fluffed it on a fresh plate. She was still motoring when I came back out.

“I know! A maid at the hotel turned it in. Really? That’s her job—why should I send her something?”

I refilled condiments, added sweetener packets, and straightened chairs. This woman could talk.

“It is! So beautiful and blue and sparkly—I can’t wait to have it back! I wish I didn’t have meetings this afternoon, I’d go home right now.”

“Hank’s fine, traveling for business. He’s been such a dear about it.”

She flagged me over, digging in her purse. She looked ridiculous, fumbling around in her shades. I wanted to slap them off her face.

I ran her card while she kept on with her mouth. I set the bill folder down and whispered, “Thank you, Mrs. Szymanski—” She flapped her hand at me. I don’t know why I bothered.

Phone pressed to her ear, she bustled out. I locked the door. King Vance grunted without looking up. I cleared and set her table—no tip, of course—and clocked out. I shouldn’t have checked, but there was only one Szymanski in the phone book.

Driving back to our place—my place—I wondered what would be left. I didn’t want to find out; most of the furniture was Ryan’s. Since I didn’t have any errands to run, I just drove around and smoked. It beat sitting in an empty apartment with nothing to do until my next shift. Eventually I found myself on her street. It was a swanky neighborhood, lots of new cars and green lawns and old trees. The box was by the front door, as advertised. Some of the ink had rubbed off, striping the cardboard. The label said it came from some fancy-pants hotel in Cape Coral, Florida.

Back at my apartment, I sat on the carpet where the couch used to be, between the four square dimples where its feet sat, staring at the box. I’d rather have a piece of jewelry than that ratty couch anyway. Inside was a fist-sized velvet box packed in foam peanuts. I held it in my hand, rubbing the domed velvet. I popped the lid and flinched. An eye stared at me from between satin folds—a sparkling glass eye. Blue, just like Ryan’s.

Chip Houser is in the MFA in Creative Writing program at the University of Missouri in St. Louis. He’s also a practicing architect and has ongoing issues with caffeine and story prompts.