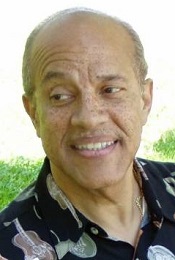 When he turned Numb Thing, his head, it kept on jerking, left, right, back again, slowing to a weak vacillation, like the oil-dripping black fan back home muggy nights, mosquitoes at the screens. Turning, rolling to the beat of drums and pain. And, again, abruptly, the violent flapping that he couldn’t stop. Momma wrung dat chicken’s neck…. He was four then, but could still bring the image to mind.

“Home be more than all a dat.” His assertion seemed like it meant something to the white woman peering down at him. Least ways, got me a ticket outa here. Adios Nam, adios! A thick wetness lay at the side of Numb Thing. Was he drooling? She hip, she git it! Niggah like me lucky. Lookah heah, lookah heah!

All that out loud? Wide-eyed in Jesus Christ our Lord ‘n Savior, the big deaconesses wearing dark green masks, waiting at pew ends, with ashy elbows, to soothe the sweating women who got the spirit and swooned ‘neath the sunlit stained glass window, like the light at the dentist’s—old Dr. Baptiste. Echoes in that little church Moms went to Tuesday nights, Sundays too. Or…. No. This wasn’t Bethel Faith Baptist, with brown-skinned girls, arms, legs gleaming from lotioning, dressed up in Sunday dresses, neat, white socks. And that one girl.

The white woman’s lips moved: “Home is more something. And it’s a flower.”

“Wise above, I heard that,” he managed at the next throb. Was a officah told us, dressed for Nam: a newborn child know everything, and forget it growing older. He laughed at the notion, then coughed. Somethin’ smokin’? Somebody gimme a coffin nail. A Marlboro, not bent, and clean white, dry.

He felt so weak. Sundays, Momma made thin pancakes him and Jamesetta and Raymond joked about—nylon cakes—but still gobbled up.

White chick went silent, like a corpse. He knew what dead looked like: mud-spattered, graying, ready for zipping up in dark, thick plastic. Onlyst girls here is Charlie and nurses. What that girl’s name?

She breathed away from his face like when the doc say turn, cough.

His hands shook. How long they been shakin’? She understand why he said that? Couldn’t stop his hands shaking. A creeping confusion rose, up from his feet to his stomach. The worst stomach ache in the world he had, the worst. Shakin’ like nobody’s business!

Drum beats. “Dat’s dem thirty-fo’s. Kicks up some dirt like a mothah,” Wag, his homeboy, had said. “Like we gots us some hell breakin’ loose.”

White chick slid her green mask over small lips again. Her teeth, they white? He knew, like the monsoon’s blow, wet and hard, even in the boonies’ syrupy heat, knew that he was too oily from the gun play, smeared in shadow green, too ignorant for her. Like the white girls in school uniforms, easy to talk to, even if sassy; not like the sisters in the project. She the dental assistant? Besides…where was his weapon?

“Mah…sixteen?” he whispered. “Where’s it at?” Feeling around on the jungle floor, exhausted, eyelids heavy. Novocain doing its thing….

His rifle—there it go!—mounted like a trophy-fish above the stove next to the scratched-up counter holding a taped-up blender, ancient toaster oven. Not a dental office. Frigidaire door showed its crudely painted blond Jesus. The church kitchen! Be twenty-one, two weeks. Be nice to have everything set for my birthday. And back in da world too, bruh!

His eyes popped open from another roll of pains.

Her teeth were white, bared, working at his belly, mask hanging like a large leaf from her perspiring face. She tryin’ to get me undressed, to fool aroun’! He moved to sit up, shuddering, anticipating new hurts.

“Now, now,” she said, two fingers pressing him down. And he knew that this masked girl needed him, down onto his burning back, knew her hair, afire, was for him, eyes intent like Uncle Isadore’s big black dog. Knew as she slid off his fatigue pants. Knew, breathing in burnt powder, coughing up blood, crouching behind trees sticky, sopping wet, drums thudding, mud in mouth. Knew, holding her in his gasps; she, hovering like a Huey, working him rhythmically. The trembling saw his arms fall away.

A high-pitched hum initiated. He remembered her name!

“You hit? Wag? You hit?” Intense whispering. Looking about, spotting a grinning Ezra Wagstaff, with wet head wound, two pews back, he threw his ace boon-coon a snappy salute, held up by two deaconesses—mute, no-nonsense women. Amen. And he was ten again, after Sunday school, standing with Violet on Melpomene Street. Can I gets a amen? Smiling eyes, hers. Violet, it was her, kissed him. Amen. Lord, so sweetly he wanted to…to cry! Glory! Pretty as a flower. Where she sittin’?

The agony in his stomach…. Gone.

Choir soundin’ GOOD dis Sunday mornin’! Please rise. Up, up. The sound of the thick, black zipper zipping up…up, Violet’s “amen” ascending. The most beautiful purples and greens and silvers appeared with the slow motion of Reverend Klinepeter’s arching, beckoning arm, his basso contrivances exhorting sinners to step forward. An’ who gwine be saved t’day? Who comin’ forth to asept d’ lawd Jesus Christ as his sav-yuh dis good, good mawhnin’?

‘S me, he knew, and Violet’d be right proud. Feeling renewed, he rose along the stuttering sound, Violet, Momma, the congregation, humming, clapping, with the choir’s rocking rhythm at his back, shoulders squared away, sharp as a tack, Jack! in dress greens, black boots, man, like jewels! Grinning back up at Reverend Klinepeter, he began his journey to the pulpit. The buzz. He felt Violet’s eyes, like sunlight when you cold, urging him on. The buzz, ending. Ah…. Home’s more somethin’. And a flower!

Excell Hunter’s fiction and poetry won first-and third-place prizes in the International Black Writers & Artists/Los Angeles 2003 competition. His fiction has also been recognized by New Millennium Writings and his poetry has been published in such journals as Ocean Diamond, Every Day Poetry, The Cherry Blossom Review, The Pomona Valley Review, and Statement.

Excell served as a public schoolteacher for 20 years and was honored with a Disney American Teacher Award. A former retail store owner, he also worked as a fiscal officer at the UCLA School of Engineering and was a cartoonist for the University Times, of California State University, Los Angeles, while earning his master’s degree there.