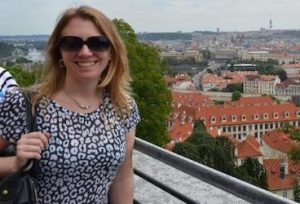 His large, strong hands gripped the top of my skull. I could feel him pushing harder and harder down on my body as I kicked and flailed and fought against him in the deep end of the pool. I’d need to surface again and soon.

I was fifteen years old and at my last day of lifeguard training. I’d passed all the written exams, demonstrated every skill of CPR and First Aid (I’d been certified since seventh grade), and—thanks to eight years on a swim team—aced the swim test on my first try.

The only obstacle that remained was the active drowning victim scenario. The other members of my small class were either boys or older or both. No one else was a blonde, five-foot-two inch, one-hundred-and-twelve pound girl. My teacher, local swim legend Coach Finn, was not tall but—even in his early 50s—still built of lean, solid muscle.

He’d barely challenged the others in their practice rescues, confident that the boys, like my six-foot-tall friend Bobby, could overpower any victim anxiously clawing at him as he dragged them to safety.

I would not be so lucky.

All week Mr. Finn had been warning me that my test would be especially tough as he paced around the classroom in his short red gym shorts. “Female guards have it harder,” he’d said. “You’ll need to do whatever it takes to first save yourself…and then your victim. It’s stupid to have two people drown.”

And, so, there I was, lungs bursting, head spinning, his words “whatever it takes” echoing in my brain.

What was a girl to do?

I kicked him—never mind where and never mind how hard. All that mattered was that he released me immediately. I shot to the surface, grateful to be filling my lungs.

I started work a week later with the highest recommendation from Mr. Finn.

Maria Judnick is a writer and educator who lives in the San Francisco Bay Area. She blogs periodically for KQED Pop! and is currently finishing her first novel.