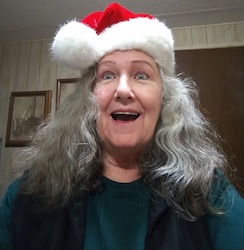 She was a thin woman with a large purse. In her purse were all of her necessities: a toothbrush, lipstick, eyebrow pencil, hair brush, fresh panties, baking soda for freshening her socks and brushing her teeth, a water bottle with a filter so that she could fill up anywhere, packets of instant organic coffee, a bottle of clove oil to freshen her breath, a bag of nuts—walnuts specifically, since they keep diabetes at bay—a notebook, a dictionary of Gregg shorthand words, for she still planned to memorize all of Gregg’s symbols so that she could write faster. A Spanish dictionary because learning a new language keeps one’s mind young, a tall, wide, empty container of Clorox wipes, some baby butt wipes in a zip-lock baggie, and a 4-in-1 tool for disasters.

The tool can shut off gas, pry open doors, and move debris, but today, she chanced leaving her apartment without the 4-in-1 tool in her purse, which was risky, because Portland is supposed to have a major earthquake any day within the next 50 years. But she needed room in her purse to put her little pionus parrot. She was going to visit her boyfriend and his great grandchildren who loved seeing Boy Bird.

Thinking about him (her boyfriend, not the bird), she remembered she might need her Astroglide personal lubricant. She recalled the day her female gynecologist recommended it “from personal experience.” The gynecologist smiled knowingly. “It has a crazy name but it works better than the other ones.” Marcia always wondered how her gynecologist could enjoy sex. Wouldn’t the doctor’s mind be stuck on pictures of anatomy and physiology? And every time Marcia thought that, she reminded herself that auto mechanics can enjoy riding in cars without thinking about how the pistons fire. Someday, Marcia promised herself, I will write about my gynecologist. She put the Astroglide in her purse.

Getting Boy Bird into her purse was a problem, because he didn’t like small spaces. But, once inside a small space, if the space quickly became dark, he didn’t mind it because the darkness meant he was to go to sleep. That was how he was. She liked that about Boy Bird. He believed that if a room became dark, it meant that it was night and he was to go to sleep. So, carrying him in the purse was not a problem; just getting him in it was the problem but she got him in without a bite.

She zipped the purse shut, and then opened it again to put in a zip-lock baggie of bird seed, and a small jar of water. Boy Bird tried to crawl out but she pushed him back in and zipped it shut. He didn’t attempt to fly out because she had clipped his flight feathers.

She slipped the purse strap over her head, looked around her small apartment, closed the door and locked it. Not wanting to disturb Boy, she put her keys in her raincoat pocket where she kept her senior citizen’s monthly public transit ticket, and then she walked to the Max light-rail station.

But, once on the Max, she faced a dilemma. Train time is her self-designated writing time and her notebook was in her purse. If she opened her purse and Boy hopped out, one of the passengers would begin asking her questions, and mothers with children would want to know if their children could pet the bird and then she’d never get any writing done. Besides, a bizarre passenger might grab Boy and run.

So, the only solution was to unzip the purse and try to hold it closed with one hand while the other hand searched for her notebook and chanced getting bit. Boy Bird had rules about invasion of his space and waking him up to scrounge around his body in the dark was worthy of a good bite.

Do I have a Band-Aid, she wondered, for if Boy bit her, she would bleed, not because his bite was severe but because she was so old and thin skinned.

She decided to think about her dilemma and then noted the Poetry In Motion posters on the train and decided she would write a poem. She admonished herself for not yet having memorized the Gregg shorthand symbols. If she had memorized them, she could write quickly on her hand with the space pen she carried on a hemp rope around her neck. The space pen could write on her hand upside down and on wet paper in the freezing cold. She had the pen on hemp because hemp is good for fire-starting and one never knew when they might need a fire starter.

She wrote the poem up her arm:

You have loved many before me. Lessons learned which allow you to continue on.

Your wrinkles are wise. They bear stories of hopes lost and life’s toils.

When you look at me with your wrinkles and twinkles I feel honored and cherished.

Do you feel the same?

Do you feel honored and cherished when I look at you with my wrinkles and twinkles?

Or do you see the young woman in me?

They were in the tunnel, the one near the Sunset stop, when she heard the explosion. The train came to a stop. I don’t have my 4-in-1 tool. How will I get out of here? That was her first thought. Her second thought was, stay calm. It is the first rule in an emergency. Safety next. Whatever you do, stay calm and think safety. This she learned from a Red Cross disaster preparedness class.

The other passengers screamed and proceeded to have hissy fits. Marcia imagined herself a giraffe and breathed all the way down her long giraffe neck to her big giraffe lungs, filled them with air, and then slowly exhaled back up her long giraffe neck. When she breathed this way, the calm came quicker. The slower the breath, the quicker the calm. What an odd rule, she noted.

Then she began to say “Thank you,” silently to her father in heaven. “We are not dead. No one is injured. We are breathing air, not gas. It is not too cold. It is not too hot.”

After a while, she opened her eyes because she noticed the hissy fits had died down and she saw that the passengers were watching her. She smiled. They didn’t know, but she knew that her breathing, her calm, had affected them. This she learned in a psychological first aid class. People unconsciously match their breathing to that of others.

Then the car lost its lights. Good, she said to herself and wiggled out of her panties. She unzipped her purse, took Boy out and set him on her shoulder, put the panties in her purse, and removed the empty Clorox container and butt wipes. She opened the lid of the container, scooted to the edge of the seat, slipped the container under her skirt, and put her crotch fully into the opening of the container and peed. This was why she always wore a skirt or dress.

She popped the lid in place when done, set it between her ankles, she slid back in her seat, fixed her skirt, then picked up the Clorox container and set it in her purse. This small act of relieving herself when no one else could do the same gave her a feeling of being in control of the situation and she would have liked to share the technique with the other ladies on the train—they could pour the urine out between the cars—but the other ladies wore pants. A woman should never wear pants, she silently admonished the ladies.

She sat Boy on her lap and stroked his velvet feathers. She scratched his neck. If he lived with another pionus parrot, they could preen each other’s neck feathers but she served as Boy’s parrot friend, and did the preening for him. This he loved and it endeared her to him.

She put seeds in her hand and put her palm to his beak. He wasn’t interested in eating. She knew it was because it was dark. Birds aren’t like people. They don’t head to the refrigerator during the middle of the night. She decided to freshen her lipstick because she liked to give Charles a big red smooch. It made his great grandkids giggle and the smooch was foretelling. It would tell her whether she would later need her Astroglide and whether she would ride home in fresh panties. That is, presuming they got out of the tunnel.

Sharie Kelley is a social worker by trade and a suicide crisis worker by occupation. She founded and published a print tourist magazine for three and a half years. In 2012 she won second place in the Blue Thumbnail short story contest.