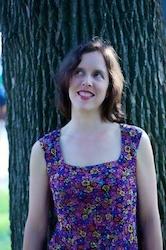 It was at Sweet Temptation on Madison Avenue
as I dropped Swedish Fish one at a time
into a small paper bag, when my friend Danni turned
to me and said, You’re a kike.

I looked up surprised, stung, not by the word
but that it meant she might not like me.
I felt dirty and small and poor, though I was
none of those things. I stared back

at her eyes that reminded me of blue snowflakes,
saw my scattered reflection in them.
You don’t know what you’re talking about.
She smirked. We were 9 or 10, wearing our uniforms—

navy pinstripe jumpers over white button-down shirts.
That gift box of a store merged with her now
in all its perfect rows, strands of confection—
Her hair was the longest and the blondest, a shining mystery.

I went home with my bag of sweets and told my mother.
She probably heard it at home—She knew the family
but not well. Her father was involved
in the McCarthy hearings, and on the wrong side.

Something about her mother being ill. She called there,
and Danni didn’t call me any names after that. We had no more
play dates, which was fine because her apartment
was always dark and her mother loomed sadly.

Danni left the school eventually, and then I did.
There’s no real record of her after that. No Aha searches
or social media pages to round out the story—
Just those red fish I still pick up to take home

to my mother, who has forgotten a lot—but we still love to chew
them, and they still get stuck in our teeth.

Kathleen Kraft is a poet, freelance writer, and a yoga teacher. Her chapbook, Fairview Road, was published by Finishing Line Press in 2015, and her work has appeared in many journals, including Five Points, Gargoyle, and The Satirist. She lives in Jersey City, NJ.