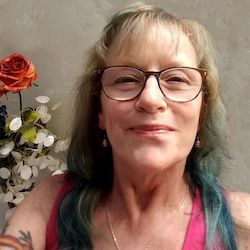 Terrified, she pushed open the door to listen.

Once, on just such a night as this, she had heard nothing. The silence had been overwhelming, suffocating in its emptiness, pulling her into an endless, black abyss. Dizzy, she’d stepped into the darkness of the room anyway, trusting that there was a floor beneath her trembling foot, an Earth beneath that floor, a God somewhere in the universe holding up her world. Her world—what an insignificant slice of existence that must be to an omnipotent being, a creature of light and power and life.

Perhaps that was why He, or She, or It, had on that night not so long ago forgotten her little piece of being. Would this evening be the same, as if the Almighty Something’s holy finger were pressed firmly on the Rerun button of the cosmos?

Her foot touched down and she felt wood, cool and smooth. She took another step, then another, kept going until she bumped into softness—the mattress. And still, getting more difficult to hear beneath the thudding of her own heart—

Her fingertips trembled but she gently flattened her palm across the frail, bony chest.

Her own breathing was harsh now, filled with fear and anger.

Somewhere in the void of creation, the Rerun lever had, indeed, been thrown, forcing her to do for this parent as she had been damned to do for the first.

She picked up the bedside telephone and dialed 911.

Yvonne Navarro is an award-winning author of twenty-three published novels and a lot of short stories, articles and a reference dictionary. She writes in a wide variety of genres, but favors horror or dark fantasy because, well, that’s just how she rolls. She lives way down in the southeastern corner of Arizona, fifteen miles from the Mexican border, is married to author Weston Ochse, and dotes on their rescued Great Dane.