THE LIGHT OF A NEARBY MOON 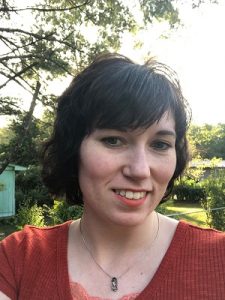 Constance Chiron’s days as a human were numbered.

The noble thing would be to kill herself before she turned, but she couldn’t bring herself to do it. She would get herself as far away from the research station as possible so she didn’t hurt anyone.

She jumped at the buzzing of her doorbell and slowly made her way to the door of her small pod. She already knew who it was. She could smell his cologne through the sealed door.

“Are you ready?” her research partner, Mordecai, asked impatiently.

“The fluorescence tests,” Mordecai said, frowning. “Are you ok? You look terrible.”

Constance tried to force herself to sound casual. “Yeah, I just didn’t get a lot of sleep. I’m ready to go.”

Fortunately, Mordecai let it go—there were perks to having a co-worker that only perfunctorily cared about her wellbeing. There were probably better ways to spend her last hours, but she felt an obligation to finish the research she had started, the research that had gotten her into this situation.

As they walked down the hall to the lab, she looked out the window and took in the vast landscape that was barely visible in the pale gray light. The planet had a livable atmosphere, but no sunlight; just a pale dim light reflected off a nearby moon.

It was a planet of perpetual dusk.

They made it to the lab and began setting up for the experiment. Constance moved a piece of equipment, and accidentally brushed hands with Mordecai, who pulled his hand back in surprise.

“Your hand’s freezing. Are you sure you’re not sick?”

Mordecai nodded and hit the switch for the UV lamps that were above the samples they had collected.

The lights came on and Constance shrieked as she was enveloped in a wave of pain. Her skin was burning and it felt like someone had driven ice picks into her eyes. She felt tears flowing down her face. She was only half aware of the UV lights shutting off and Mordecai running over.

“What the hell was that? Jesus Christ! Your eyes!”

Constance reached up to wipe her eyes, and was horrified when her hand came away with blood. She looked into a nearby mirror and saw that her eyes were leaking blood and the skin on her face was red and splotchy.

“You need to tell me right now what the hell is going on,” Mordecai said.

“I thought I’d have more time,” Constance said in despair. “I have to get away. Please help me get away.”

“What are you talking about?”

Constance pulled down the collar of her shirt to reveal her neck, where she had been injured yesterday while they were collecting research samples. When the swelling had gone down that morning, she had been horrified to find fang marks.

“Down in the cave yesterday. I was attacked—bitten.”

They had all heard the stories of the creatures living in the darkness of this planet, creatures reminiscent of the legends written on Earth centuries earlier. Maybe they hadn’t been legends at all. Maybe they had somehow found a new home when their presence on Earth had been revealed.

“You’re telling me you’re turning into a vampire?” Mordecai said. His skepticism was laced with panic.

Constance found herself crying, her tears tinged with blood. “Please, I have to get away from the station. I don’t want to hurt anyone.”

The two quickly made their way to a rover and drove away from the station. They rode in silence. She could hear the blood rushing through Mordecai’s veins, and smell not just his cologne but his sweat and fear.

She clenched her jaw, trying to ignore her heightening senses, and felt something break. She groaned, bringing her hand up to her mouth.

Constance spit out chunks of tooth, probing her mouth with her tongue. Her incisors had split, leaving the two teeth sharpened fangs.

“We have to hurry!” she replied.

She breathed deeply, willing herself to stay in control as Mordecai picked up speed. Eventually they reached a clearing away from the station and he cut the engine. Constance stumbled out of the rover and turned to face Mordecai. His was the last face she would see as herself. “Thank you.”

“Constance, I’m so sorry,” Mordecai said, stepping beside her and laying a hand on her shoulder.

She assumed he meant that he was sorry this had happened to her. But then he turned and she caught a flash of metal coming toward her. Her reflexes were quick, and she lashed out.

There was the taste of blood, a sickening crunch as flesh and bone were punctured, a searing pain.

Constance looked down in shock to see a metal stake, one used to anchor their research instruments, protruding from her chest.

Mordecai jumped back and watched in horror as blood gurgled up from Constance’s throat and she collapsed to the ground, violently seizing and then growing still. She was pale and covered in blood.

Mordecai saw that his hands and suit were spattered with blood. He vomited, gasping for air.

Shaking, he climbed back into the rover. As he drove back to the station, still numb with shock, he didn’t realize that not all of the blood on him was Constance’s.

When he washed his hands later, he would find two sharp puncture marks on his wrist.

Heather Pfeffer is a Western North Carolina native who spends her time reading, writing, crocheting, and spending time with her pets. She has loved speculative fiction from a young age and is excited about the opportunity to share her work.