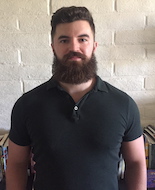 It is only a month after your husband cut his car and himself in half on the tip of a freeway divider that you see another man wearing one of his shirts that you dropped off at Good Will. It is his old Chicago Bears T-shirt, two orange rings around the sleeves. You are at Fry’s, in the frozen foods, and underneath the taut navy fabric you can see the man’s nipples. The man is tall and large, unlike your husband. He is also out of shape, unlike your husband.

You walk to the man, who is contemplating the backs of two whipped cream containers. He has hairy knuckles. It matches the sparse, dark hair on the top of his head.

“That one,” you say, and point to the Original.

The man jumps. It is strange to see something so large move so fast. He looks at you out of the corner of his eye and puts the Lite whipped cream back. When he does, you glance under his right arm, near the armpit, where a small tear resides, a hole through which you used to tickle your husband.

The man closes the door and faces you. The cold from the freezer has fogged his glasses. He removes them and wipes them on your husband’s shirt, exposing his stomach. After he replaces them, he stares down at you. His eyes are close, deep-set. His face is gaunt for his body. He has nice cheekbones, covered in a patchy beige fuzz. It is hard to say, but you think he is in his early thirties, only a few years younger than you.

“Can I help you with something?” he says.

He is obviously creeped out. You have made a significant number of strange decisions lately: doing donuts in your Honda Fit on the high school football field where your husband coached, destroying your car’s axles; telling your coworker, Helen, that the way she applies mascara looks like a swarm of bats shit on her eyes; spanking your nephew bare-assed for putting uncooked spaghetti into the outlets, him wailing like a storm alarm, and then looking up, mid-swing, to see your sister back from work early, staring at you with a crayon-white face.

You want to tell the man to pretend that you started the conversation in another way, like accidentally bumping his cart or simply saying you liked the shirt, because this scenario, taken objectively, is a great one for this man. You know that he knows that you are completely out of his league.

When he puts the whipped cream into his empty cart and grabs the handle with his meaty, ringless fingers, you quickly say, “Do you want to buy me a drink?”

You slide your hand onto the cart handle, right next to his. “Do you want to go Sips, buy me a drink, get acquainted?”

“It’s just around the corner.”

You remove your hand from his cart. You try to check your reflection in the freezer door, but the man is in the way, a navy blue orb, too large for you to see anything else.

“I’m not crazy,” you hear yourself say, and you bite your tongue.

You want so badly to rub your bare upper body against the man’s T-shirt, rest your head on the soft fabric, run your finger again and again through the hidden armpit tear. The “crazy” comment, you guess, has eliminated all such possibilities, and yet, it doesn’t seem fair. The man doesn’t know about how you lost the baby at the visitation, a trivial matter, it seemed then, only a few days after facing your husband’s red eyes at the morgue. He doesn’t know how when you lose someone violently, it seems like they did no wrong. Not placing his napkin on his lap during Thanksgiving dinners, hip flexor stretches in the kitchen doorway while you tried to bring in groceries, the way he used to pick his nose and wiped it, unabashed, on the bedside table: all of these seem innocent now, even wonderful, your attitude toward them as misguided as a pre-teen white supremacist. You also assume the man doesn’t know, like you now know, that life does not equate to starring in your own movie. You thought this once—not consciously, but through the seeming significance of your everyday actions, it was true. You thought your loved ones were also stars of their own films, everything so purposeful, straight-set, until one day your husband lay shredded under a thin sheet, and you said, Yes, and he was covered back up and slid into his compartment like a drawer of files. Now you know there is no movie, no script—or at least no director. However cutting-edge, no director would kill a star of a film in the cold, meaningless way your husband went.

When the silence is too much, you say, “Okay, let me start over. I’ve been crazy, but I’m not anymore. And my husband’s dead. And that’s his old shirt. And I’d like you to make love to me in it.”

The man snorts out a laugh. Then he sees you’re serious and eyes you more cautiously. It seems like he considers the offer, considers your body, your face, which you now realize is damp, very damp.

With clumsy, out-turned feet, he walks away.

N.L. Pillman has an MFA in creative writing from Iowa State University. His work has appeared in PANK, North American Review, New Ohio Review, Mid-American Review, and others. He is originally from rural Iowa but now resides in southern Arizona.