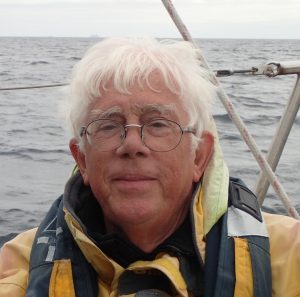 Dan looked over his shoulder; the train’s carriage was almost empty. Should he change places? When he had got on, the train had been fuller, and he had taken his reserved seat. Since then, passengers had been getting off at each station, emptying out the carriage.

The man across the table from him made Dan uncomfortable. He was slumped down, his legs intruding into Dan’s personal space, his elbow resting on a picnic cooler on the seat beside him. On the indicators overhead a name—John Smith—was listed twice; presumably, he had booked a seat for both himself and the cooler. It was the drinking that bothered Dan. The man had been sipping from a flask since Dan sat down.

Sitting together at their table, all they needed was a tablecloth and candles, and they could be a couple waiting for service in an empty restaurant. Dan smiled at the thought.

“Something funny?” asked the man.

“No, no,” said Dan, “just wondering if I should give you a bit more space. Now that there’s all these empty seats.”

“Don’t bother,” said the man, “I don’t mind the company. John, John Smith,” he said, extending his hand. He had a firm handshake. “Dan,” came the response.

Dan shifted in his seat and glanced over his shoulder. There was no one who could overhear. In a low voice, he said: “Actually, I’m a film director.”

“A film director, is it? You don’t meet many of them on trains. Not amongst us common folk, anyway.”

“Oh, I’m just trying to survey out some new locations, new ideas, you know. My next film has lots of scenes on a train.” Dan paused. “I’m still a perfectly ordinary guy, just doing his job. Although first-class travel is one of the perks of my success.” He gave a small self-deprecating laugh.

John’s smile had faded away; he was appraising Dan coldly.

Dan retained a polite smile while waiting for a reply. The reply was slow coming. John pushed himself upright in his seat and leaned forward across the table, the smell of alcohol reaching Dan.

Dan tried not to react. He wasn’t going to take offence at a smart alec drunk.

“You don’t meet many of them on trains. Not amongst the common folk, anyway,” Dan said. Light humour was the best way to go.

“No, no,” said Dan. “You’re obviously a man with a story. I like stories; I use stories.” He settled back in his seat, trying to appear relaxed.

“I can tell you one story,” bit out John. “The nasty fucker I did the last job for wants proof before final payment. I gotta bring him the head.” He tapped the picnic cooler. “I call that being fucking awkward.”

Dan tried to remember the movie John was inhabiting, but failed. He’d play along. “I can see that’s a problem, alright.”

“Yeah. It’s best we leave it there. I’ve said too much—the booze talking. I’ll just sit here and mind my own business, and you can stay there soaking up the ambience for your, your, film. OK?”

“Fine,” said Dan. There was a short silence.

“Just thought of something,” said John. “I do have a last couple of beers left. Join me in a beer to show no hard feelings, OK?”

Blocking Dan’s view, John lifted the lid of the picnic cooler, felt around inside, and pulled out two beers. Dan had held his breath when John reached for the cooler, wondering; he eased it out in relief. Beers!

They clinked their bottles of chilled beer, and sat in silence for the rest of the journey, keeping their thoughts to themselves.

They left together at the end of the line, John lugging his picnic cooler. Together they walked toward a row of waiting cars, two large black SUVs noticeable in the line. A door opened, a hand beckoned. With a farewell nod to Dan, John pushed the picnic cooler into the car, past a pair of highly polished black shoes. He pulled the door shut behind him, and the SUV pulled out. Dan watched it leave.

He turned and headed for the bus stop. He was thinking that he’d tell the guys in the office that he saw the head. Or was that too much?

Gordon Pinckheard lives in County Kerry, Ireland. Retired from a working life spent writing computer programs and technical documents, now freed of constraints and encouraged by Thursday Night Writers (Tralee), he can write anything he likes to entertain himself and—hopefully—others. In 2017 he won Grindstone’s flash fiction competition. His stories have been published by Daily Science Fiction, Reflex Fiction, and Cabinet of Heed.