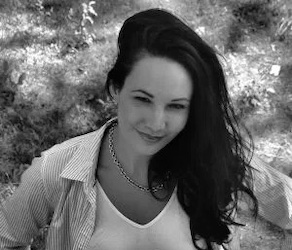 She swims in the above ground pool until her lips match the blue dusk. She peers through the pines to check for the signal to come home: charcoal grill smoke. She bike rides in circles at the end of the cul-de-sac while saying goodbye to her best friends. They all live in the same neighborhood. They tell her they’ll see her tomorrow morning at the park. They tell her to be careful, to watch her back. She laughs off their silly paranoia. She’s learned not to take them too seriously since the fraudulent Ouija Board incident and the time they tried (and failed at) a séance at the local cemetery. Besides, it’s already scary enough riding home alone in the approaching dark to the end of the street. She pedals fast, still soaked from the chlorinated pool. She speeds past houses with yellow kitchen windows where moms cook supper and blue living room windows where dads watch cowboy shows, beers in hand, grass-stained sneakers.

Then there’s the dark, moody windows of his house—a lonely house, a creepy house diagonal from hers. The lights are off. He’s not home. That’s what she thinks until she spots the cigarette burning in the yard. He sits in a lawn chair, smoking, staring. He doesn’t say hello. He resembles a decrepit stone yard fixture. She speeds by without acknowledgment. A chill runs up her back. She likes the yellow windows and the blue ones too, but not the dark, moody windows, unless they’re decorated around the holidays with colorful lights.

Her best friends said they heard rumors about him. How he hunts animals in the winter woods and eats their guts and brains for vitamins. Her best friends said their mothers said he killed his own baby and ate that too. He reported the baby missing over a decade ago, before she and her friends were even born, but it was never found.

“Was it a boy or a girl?” she asked her best friends.

They shrugged. “Does it matter?”

She wonders what happened to his wife. She wonders if the wife’s dead too. She should’ve asked. She skids into the dirt driveway, abandons her bike (and her haunting thoughts), sprints up the back steps, and bolts into the yellow-lit kitchen, breathless, relieved. A plastic-wrapped plate is set on the table: grilled hamburger, macaroni salad, ambrosia. Bottles of Heinz, French’s, Hellman’s. A glass jar of Vlasic pickles in a sickly green liquid. A cup of lemonade with a striped straw from McDonald’s. She eats her lukewarm dinner and she thinks about her crush from school. She misses the boy she loves. She kissed him on the cheek once during recess by the monkey bars. Only two weeks to go until the bus picks her up at the corner of Chestnut and Maple.

Her mother runs a bath while she sits on the padded toilet seat. She picks at her chipped nails. She finally asks about the neighbor. “Does he eat brains? Did he kill his kid? Is he a murderer? Why haven’t the cops caught him?” Her mother won’t answer. Her mother refuses to partake in such “gory gossip.” She’ll ask her father instead. She’s ordered into the tub. Her cold body slides into the hot strawberry bubble bath and bits of fresh cut grass from her best friends’ yards float to the surface. Another brilliant day is over. A magnificent day, decades from now, she’d give anything to experience once more.

For now, before bed, she hangs out her open bedroom window. She peers into the dark yard glowing with lime green fireflies. The crickets chirp and the frogs croak. A cone of light emanates from a single street lamp where they drew on the pavement earlier today. A colorless afterlife light, she thinks. (She misses her beagle, buried back in spring.) She chalked her name into the pavement, along with the name of the boy she loves, enclosed inside a crooked heart while her best friends scrawled words like dick and boobs.

She peers down the street to the neighbor’s house. His house. The light is on now. He’s inside. He stands in front of the bay window, bent silhouette facing her direction. Hot blood rushes into her face. She feels weak, alive. She squats down low to watch what he does. He’s frozen, gazing at her house. She wonders if he knows her name. He turns away from the window and his eyeglasses glint off something. He yanks the drapes shut and all that’s left is a slice of light from the television between two curtains. She jumps into bed. She lets her mind simmer around the fully lived late summer day. The rawness of skinned knees, mosquito bites, sunburned shoulders, slashes of blinding light that hurt the eyes, like sun streaks on windshield. Like milky teeth to flesh. Saw to bone. It reminds her that she’s alive and just how much it hurts to be alive.

Jenn Powers is a writer and artist from New England. She has work published or forthcoming in over 70 literary journals, including Lunch Ticket, Witness, Spillway, and CutBank. Her work has been anthologized by Running Wild Press, Kasva Press, and Scribes Valley Publishing, and has been nominated for the Pushcart Prize, Best of the Net, and Best Small Fictions. Jenn holds degrees in English literature and creative writing. She’s currently at work on a mystery thriller. Please visit http://www.jennpowers.com.