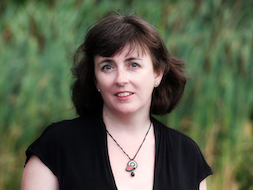 “Lois, babe,” you said, “this is the easiest money you will ever make.”

There was something kind of charming in the way you threw my flimsy resumé over your shoulder and said, “Say good-bye to Squaresville. You got the look, kid.”

You were wiry and excitable, like a whippet I used to have. I wanted to believe you. I wanted to run away with the circus.

“Nothing. Isn’t it sweet? You’ll wear this—” You tossed a white sequined bathing suit at me. “—and stand there.”

You guided me over to the backdrop, not slowing down while I picked my way through the sawdust in my high heels. I looked at the target painted on the wooden board with your name spelled out in glitter: “Rapid-Fire Ray.” I reached out to touch all the little scrapes and gouges, painted over many times. They outlined the form of the girl who used to work for you. I think she was shorter than me.

“So you’re going to tie me to this thing?”

“No, no, no. That wouldn’t work at all. The audience needs to see that you’re here of your own free will. You have such trust in my awesome talent that you like having me throw knives at you. It’s no big deal. That’s why it’s so important to smile.”

I’m not really a performer. I used to be a bank teller—one of the rubes you probably make fun of. I answered your ad because it was literally the only one in the paper that day and I was hard up. It didn’t really say what the job was, but I’m an optimist. What’s the worst that can happen, right? I suspect you hired me for my hair, which is platinum and kind of dramatic. It looks like a wedding veil when I wear it down.

“I like it,” you said, and touched it, going deep for a handful at the back of my neck. “It’s real.”

I had never had a boss who touched me and I guess I passed your first test of self control because I did not freak out. I didn’t step away or scream. I didn’t smile either; it was hard for me then to smile at fear.

“Great. We should get you some big hoop earrings. I’ll bet I could put a knife through one of those.”

“Lois, sweetie, I’m an artist, an innovator. I push myself. What’s the point of doing something you’re absolutely sure you can do?”

I guess this was where I could have backed out. There must be some other way to make money. I just wouldn’t get it today, so I didn’t say anything and you took that as a yes.

“All right, let’s get changed and we’ll rehearse a little.”

“Yeah, babe.” You had already turned away and brought out your knives, a big black, shiny case just full of them.

“This might be a little easier for me if I could see you throw around somebody else first. You know, just so I know what I’m in for.”

You smiled and gave me a look of pity. “There isn’t anybody else. That’s why I had to hire you. If you can’t do this, I can’t go on tonight.”

“But hey, if it’ll make you feel better, watch this.”

You swooped up a handful of little stilettos, holding them by the points. You threw them so fast, one right after the other, they whipped through the air and landed in an exact pattern where a girl’s head should be. I looked closer and saw that the arc of knives was higher than the old marks. You must have been thinking of me.

The costume was a perfect fit, which I took as a sign. I stepped in front of the target and stood straight and compressed, trying to make myself as small as possible.

“One thing I need to teach you Lois, is a sense of showmanship. Spread your arms and legs like you’re trying to grip the edges. Surrender yourself to the moment.”

You had changed too. It’s not every man who could put on a gypsy costume and own it, but somehow you did. Your pencil moustache didn’t seem silly anymore.

“Say, Ray, what happened to your last assistant?”

By you? I wondered.

“Can’t do a pregnant girl. People go into conniptions over babies and animals. If I tied a chimp to that board, people would string me up, but pretty ladies are always good fun. Like your life is worth less than a chimp’s. I don’t know. Here it comes.”

It was over so fast. I heard the quick chunks as the knives went into the board. One by my head, one by my right hand, one by my inner thigh, so close I could feel it quivering against my skin. When it was over, I stepped away from the board and ran for the barrel by the gaudy tent flap. My legs were shaking and I stumbled like a newborn calf. Oh, God.

I nodded, pleased that I hadn’t disqualified myself. You handed me a bottle of water. “Let’s do it again.”

I just stared at you.

What was it about you? I stepped up to the target and stretched out.

“Two things, babe. You need to keep your eyes open and you need to smile. This is supposed to be fun.”

All I could think was that I hadn’t told anybody I had a job interview. Nobody knew where I was.

“That’s not a smile. That’s a grimace, and it’s worse than no smile at all.”

You did the only thing you could do. You smiled at me first, a warm conspiratorial smile that I had to return. I’m glad I kept my eyes open. I got to see the arch of your eyebrow as you closed one eye and aimed. I followed the blur of the flying knives. Most people never get to see such things, but I did.

“Much improved, kid. How do you feel?”

People are starting to gather by the tent flap, snooping to check out the new girl. I feel special and brave—something that has never, ever happened to me before. Spin the wheel, set me on fire. You’ve given me something, Ray, and I think I might have a taste for it.

Colleen Quinn has been published in The Brooklyn Rail and Spinetingler Magazine. She lives in Brooklyn, New York.