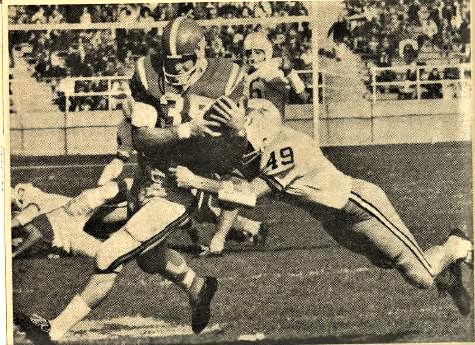 WAISTED EFFORT: Les LaPointe of Columbia lunges for the tackle but can’t keep Don Riesett, Rutgers back, from gaining 9 yards in game at New Brunswick, NJ. Rutgers won, 37-34, on a touchdown with 14 seconds left in game. (NY Times/AP)

Senior year in college: The final hurrah before the hard slog of adulthood. The last taste of campus celebrity. The fleeting perception of being a big shot. The hard reality of taking a cheap shot.

I’d had a terrific collegiate run through my junior year at Rutgers. Scholastically, I was on the Dean’s List. Socially, I was an officer of my fraternity. Politically, I was a member of the university’s prestigious Crown & Scroll Society. And athletically, despite a recent knee surgery, I had performed well enough on a football team that lost as many as it won (actually a few more) to pique the interest of NFL franchises like the Chicago Bears, Kansas City Chiefs, and Houston Oilers.

Life was good, perhaps too good.

We had just finished the first practice session of summer camp—two weeks of two-a-days in New Jersey’s late August hell.

“Get in shape, Don,” grumbled Rutgers’ hard-nosed offensive coordinator disapprovingly, his steel-capped cleats clanking on the walkway leading into the locker room while I sat on a bench outside the door, wheezing my ass off and threatening to barf—again.

The days ahead promised to give new meaning to the description I had once heard of a football practice: a period of intense boredom punctuated by moments of acute fear. The author of those words was presumably equating fear to the physical aspects of a game that demands the repetitive collisions of large bodies intent on doing damage to one another. Honestly, that part never bothered me as much as the psychological challenges of becoming a starter and remaining one. That said, and what with my having been Rutgers’ starting fullback for the past two seasons, one would think I’d have arrived at my final summer camp in the best shape of my life. Clearly, I did not. And so began my last year in football—one year too late, as it turned out.

So there I sat, outside the locker room, totally spent, wheezing like I had emphysema and knowing that I was carrying a few too many pounds. I had tipped the scales that morning slightly north of 225—considerably higher than my ideal playing weight. Not only did the next couple of weeks promise to be brutal, but a younger, faster, magnificently conditioned sophomore would be pushing hard for first team fullback reps. By the close of summer camp, my starting job would be in serious jeopardy. Good news, as it turned out.

There are times in one’s life when negative circumstances conspire to not only focus the mind, but actually free it. I had last experienced that focus as a Rutgers freshman with such a lowly place on the frosh team’s initial depth chart that there was no way to go but up. It was a “what the hell” moment that saw me pull out all the stops and ultimately land on the first team. Now, three years later, I found myself at risk of teetering off that prestigious pinnacle—a fall that would hurt far more than never having made it up the hill in the first place.

By the end of summer camp, I had wheezed and barfed my way into pretty decent shape, but my coach maintained a serious bug up his ass about my not arriving that way two weeks earlier. “Show me something Saturday, Don, or Mel will be running with the ones.”

Coach Hard Nose was referring to that Saturday’s summer camp coup de grace— the final, full-tilt, game-condition scrimmage. Open to the public, officiated by pros and observed by scouts, it defined the team for the season ahead. If I was going to enter the season as the man, I would need to pull out all the stops that afternoon—my one chance to make up for a lazy-ass summer and an embarrassing summer camp.

Forty-five years have passed since that suffocating, late August day—years over the course of which I have had at least my share of negative circumstances that focus the mind. But I can think of no time when I was more determined to take it to the absolute max than on that Saturday afternoon in Piscataway, New Jersey. It was simply the best game of my life.

Playing with reckless abandon, I ran over anyone who got in my way and went out of my way to run over those who didn’t. The crowd was juiced, officials buzzing Who’s the fullback, scouts taking note of big number 35, and me high with the exhilaration of kicking ass—my head never clearer, my heart never hungrier, my adrenaline literally feeding off itself.

No one touched me that afternoon without paying a painful physical price, no one except Byron.

The game was in its final moments, our dominating offense threatening to score one more time, the ball on the 14-yard line. Coach Hard Nose called my bread-and- butter play—a power slant off right tackle. I took the handoff and rumbled toward a hole that was opening to daylight. A linebacker and a defensive back quickly moved to plug the gap. I probably smiled when I saw them coming; it was that kind of day. I steamrolled both of them and sauntered into the end zone: the perfect finish to a brilliant afternoon. Or so it seemed.

Byron, playing strong safety, had pursued me into the end zone. He either didn’t hear the whistle blow or was too overwhelmed by his own momentum to stop his charge. Two steps across the goal line, I was beginning to turn, relaxing my body, when Byron’s shoulder drove into my right knee. Ligaments and cartilage were instantly rearranged.

In one brilliant and brutal arc of an afternoon, my season was effectively over.

Years later, I ran into a former teammate, a tough running back from Maine. It had been maybe six or seven years since our playing days, so there was plenty to catch up on. Yet, not ten minutes passed before Jim said, “I’ll never forgive that fucking Byron for that late hit on you! It was a cheap shot.” I hadn’t thought much about that moment in years—marriage, kids, career and the rest of adult life’s bag of tricks having all but obliterated the memory. But as I was suddenly reminded of it, I realized that I wasn’t the only one affected by Byron’s untimely hit. When I went down, Jim lost the best blocking fullback he ever had clearing the way for his fleet feet.

I did end up playing some that year, but half the season was gone before my knee was rehabbed enough to return physically. I never returned mentally.

And so it ended. Football had been a part of my life since I was six years old when, every Sunday afternoon, my dad would take a bunch of the neighborhood kids to a field near our Baltimore row house to teach us the basics of a game I would grow to love. As I got older, fall Sundays were often spent at Memorial Stadium, cheering for the Baltimore Colts and my role model Alan “The Horse” Ameche, the Colts’ great fullback. On a snowy December night in 1958, Ameche was immortalized in an iconic photo when he dipped his shoulder and barreled into the end zone to score the winning touchdown as the Colts beat the New York Giants in sudden death overtime to become World Champions and seal the NFL’s destiny as America’s premier sports attraction.

I suspect that somewhere inside my psyche, as I galloped into the end zone on Rutgers’ main practice field nearly ten years later, I was channeling Ameche’s iconic image. Sadly, I never achieved my dream of becoming “The Horse II,” but I did get a glimpse of it on that hot August afternoon in 1967 when I scored that final touchdown and began to turn in triumph.

I wish I could have that moment back. I wish Byron hadn’t smashed my knee with his late hit. I wish I could see what that last football season might have been, and how my life might otherwise have evolved.

But we don’t get to hit life’s do-over button. Good thing too. Where in the world would we begin? 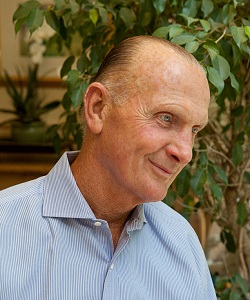