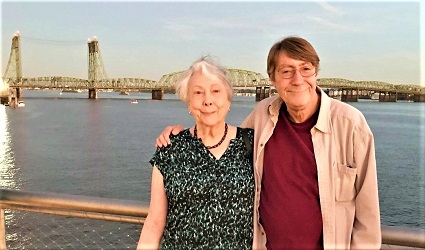 I took it for granted, my lucky life, right up to the point my husband Steve pulled up to this red traffic light on the new Interstate. One left turn and a few blocks into a new neighborhood and we would be home at our small-scale, but adequate, three-bedroom brick colonial.

Steve was twenty-one when we started dating. My girlfriends all went on about how he looks like James Dean, but I think he’s more handsome, taller, with finer even features, and a slender nose. We were married when I turned seventeen and Boom! Boom! Boom!—three babies standing up in the back seat of our ‘64 Pontiac coupe we bought brand new two years ago. The hood sparkles in the summer sun in front of me like real gold.

Our son Stevie is six, and being the eldest he stands with authority, his arms spread out across the back of the seat. Jake, on the other side behind me, is four. He imitates his big brother, though he’s careful not to encroach on Stevie’s arm space. Priscilla stands in the middle. She’s almost three and precocious—talks and acts like a four-year-old. Jake is a towhead, and Stevie’s hair is like pale champagne. The sun has turned Priscilla’s dark hair auburn. Their blue eyes shine like jewels next to skin tanned from playing in our backyard and wading in their plastic frog pool all summer while I sat on the patio sipping ice tea. They are strong, healthy children.

Like I said: I’ve taken it all for granted, my lucky life.

I turn to check on my babies again, and a red hot wire of alarm shoots from the base of my spine to my neck like lightning. I see a car speeding straight for them with nowhere else to go.

I can see the young muscular driver gripping the steering wheel with manic focus, and I know he is running for his life. He is coming so fast it will all be over in two seconds. There are cars on the outside lane next to me. A deep grassy drainage ditch separates the south and northbound lanes of this four-lane freeway and runs under the intersection. These facts race through my brain as fast as the car rushes toward us.

With the deepest deathlike calm, I do the only thing I can do. I surrender.

Then I witness an act of astounding skill as the oncoming car gets within two yards of us. It swoops down into the drainage ditch to the left of our car, up the other side, crosses through the intersection in the wrong way lane, passes the car stopped at the red light there, whips down into the ditch behind that car and up onto the southbound lane across the intersection from us, and is gone. I don’t see anyone react as if they noticed.

I never take anything for granted again.

Barbara Ritchie received Honorable Mention for her story, “Birthright,” in the Writer’s Digest 2017 Annual Writing Competition (Literary/Mainstream Short Story Category). Her novel-in progress, After Losing Jewel, was a finalist in the 2019 William Faulkner — William Wisdom Creative Writing Competition, sponsored by the Faulkner Society in New Orleans. “Driver” is her first published story. Barbara worked as an adolescent mental health therapist before retiring to pursue her lifelong goal of writing fiction. She lives in Vancouver, Washington.