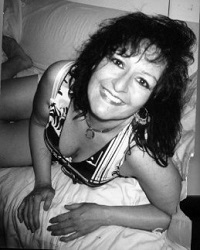 “More coffee?” the waitress asked on her way past.

“No, thanks.” I watched Annie butter her toast. She took so long, I got edgy. “What’s up?” I finally said.

“Huh?” The coffee had me wired.

The guy behind Annie was eating lemon meringue pie. Bits of meringue were visible in his mouth. “What?” I said.

The wig was hideous: too shiny, with little barrettes. Retro 1960s.

Somebody had a sick sense of humor. The salesgirl, maybe the owner, desperate to make a buck. How could they even sell something this ugly?

In the mirror, Annie adjusted the wig, studied herself from all angles. Like she was Lady Gaga instead of some deluded girl with cancer.

Years back, she’d rammed into a guardrail, heading for an after-hours joint on the Island. Cops got her on videotape. “Motherfuckers!” she yelled, struggling as they cuffed her. In her mug shot, she’d looked like a little girl who’d smeared on Mommy’s makeup.

But she looked all grown up, now.

Somebody she’d fucked. Or me. It always was, wherever we went. Even here, in the cancer ward.

All the curtains were open. “Hey, Rose!” a guy’s gravelly voice said. “Turn on TNT.” It was like one big, not-so-happy family. With cable TV.

As the magic dripped into her veins, she was tripping down Memory Lane.

Yeah, Bear. That guy she’d met, before marrying Richie. Bear was huge, and gentle, but only with Annie. How many nights had they snuck off to Bear’s place? With me as their cover?

Richie was even meaner, back then. Beady eyes like a lobster’s in that mean, red face. They fought, savagely, on the wedding night. “Walked into the bathroom door!” Annie told everybody but me, about her busted nose. “I was trashed, man!” Blood all over her gown, and veil. The wedding purse, too.

Somehow that had got empty.

Broke, and without speaking, they drove up to Niagara Falls. “And that,” Annie confessed later, “was as good as it got.”

Would she never stop puking?

She slunk to the floor, grabbing the bowl. “Worshipping the porcelain god,” we used to call it. All drunks did.

But Annie wasn’t drunk. That chemo was poison.

Pale blue, her bathroom was, with fishies on the shower curtain. Like she was underwater, and drowning, she lay, still heaving.

In silence, I sat beside her that night.

“How do I look?” she whispered.

Pale, like there’d been no sun in years. And with that dopey wig on. But that “Annie” spark was still there.

“Real good,” I said. Or she wouldn’t talk to Bear.

“Hey, lady!” he yelled across the cancer ward. Annie beamed.

As I passed Bear, I cringed. He looked ancient, bald. His Yankees cap sunk low on his face. Harley shirt and jeans on his scarecrow’s body. But it was him, all right. Same tats, and all.

He looked happy to see Annie. Even in here.

HEALING MASS, the banner read. FRIDAY, SEPTEMBER 6th. Once a month they had it at St. Jude’s. People came from all over, some in walkers and wheelchairs. Some looking optimistic, some like they’d already died way back. Slowly, they filed into the church.

Annie clutched my arm. “It’s mobbed,” came out hoarse. The cancer had spread to her throat, and lung.

The old Annie had lived for crowds: Bruce concerts, Happy Hours down Belmar. A carefree Jersey girl, she’d been.

Did toxic waste cause this? I wondered.

What a strange service. Nothing like the Masses we’d gone to, as kids. The music as lively as at an island festival. Who’d believe half the congregation was dying? The sermon was so long, I started to sweat. I wanted to leave.

“You come here for healing,” the tough, bald priest said. “But are you healed of your sins?”

I squirmed in my seat. I had to pee really bad.

“Does sin make you sick? Before your body can heal, your soul must get well . . .”

He went on, and on. Yeah, we were sinners. Me worse than Annie. Why her and not me?

Both breasts hacked off . . . and for what? She was still dying, faster each day. No hair, no voice. Soon it would creep up into her brain. . . .

I glanced over at her. Eyes shut, she was listening intently. Shouldn’t’ve cheated, she might’ve been thinking. But she’d loved Bear, not Richie. Didn’t love count for anything in this world?

I looked closer at her.

She’d dozed off. Peacefully, like she was dreaming of old times: us as grimy kids, eating Freeze Pops in the neighbor’s pool. Or the night she’d met Bear.

So peaceful, she looked.

Alarmed, I squeezed her arm.

The healing was beginning. Around us, people poured out of the pews and headed for the altar.

Annie’s smile said she’d beat them to it.

Cindy Rosmus is a Jersey girl whose work can be found in places like Hardboiled, A Twist of Noir, Out of the Gutter, Flash Fiction Offensive, MediaVirus, Mysterical-E, The New Flesh, Powder Burn Flash, and Black Petals. She is the editor and art director of the ezine Yellow Mama.