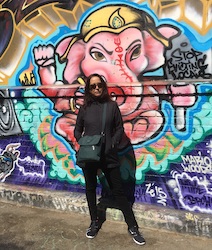 That summer a bat fell in our front yard. I was on the porch watering our porch plants when I spotted the thing dragging its wings across our dirt driveway. I wanted to call you but called The Man in Gloved Hands instead.

The Man in Gloved Hands came when I called. He got down on his hands and knees. He picked up the bat, fingered her warm-furred belly where worms thick as human fingers undulated and he told me, “She fell from the trees. These are her babies. They’re too heavy. She can’t fly.”

This was back when you were the man I loved. Back when you took walks in the evenings and came home smelling like trees. When I told you about the bat you called me Silly Girl with Bats in Her Belfry. I wanted us to make all the difference. We were like that. Batshit. Crazy.

Lately, I drive around pretending to listen to music in case anyone sees me driving around alone. If you come home now carrying an armful of green excuses I promise to forgive you. I’ll burn this house, our house, this small house we furnished to make seem even smaller.

The Man in Gloved Hands told me he didn’t have a choice. He crushed the bat’s skull between his thumb and forefinger and said her babies would quickly starve then sleep then die. “All the way around, painless,” he told me. I’ll forgive you everything. Just come.

Vicky Santiesteban’s poetry has appeared in North American Review, Poetry International, and River Styx. She lives in South Florida where she is advisor to PANKU, Broward College’s award-winning student literature and arts magazine.