MY NEIGHBOR, WHO MY WIFE THINKS IS A PROSTITUTE 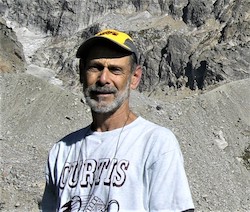 My wife thinks the neighbor down the hall is a prostitute. Her evidence is slim: another neighbor told her that a workman retiling her kitchen was propositioned by the woman. Also my wife once saw her saying goodbye to a man leaving her apartment.

“What do you mean, ‘propositioned?’” I asked her.

Maybe she did, but does that make her a prostitute?

We live in a corner apartment on the fourteenth floor of a high-rise (it’s actually the thirteenth floor but you don’t put the number thirteen in a New York elevator). The woman my wife thinks is a prostitute moved in five months ago. Her apartment is in the middle of the hall, next to the little room where we put our garbage.

My wife is the head buyer for a chain of apparel stores. She sizes up people quickly. Once she makes up her mind it’s pretty hard to change it.

Since the magazine eliminated my job I’ve been doing a lot of baking—apple pies, peach cobbler, banana bread. My wife refuses to have even a taste; she watches her weight the way she peruses the bids from the suppliers at work. When I do leave the apartment, it’s often to deliver a pie to our daughters. Eliana, who’s studying acting, lives in Brooklyn while Shoshana is up near Columbia, a fine arts major working as a paralegal.

Baking is a messy business, and keeping the counters clean and the trash pail from overflowing means a lot of trips to the garbage room. I like the ritual of dropping my bag of garbage down the chute, putting newspapers and bottles in the recycling bins and then coming back to our neat apartment. On these trips I never hear any noise from the apartment of the woman my wife thinks is a prostitute, and certainly not the kind of noise you’d expect to hear if she was entertaining men all day.

Sometimes I meet her coming out of the garbage room, dressed in something white and flimsy, a nightgown-looking thing. She wears an embarrassed half-smile, as if to say, oh, I’m sorry, I really shouldn’t be walking around in this flimsy thing, even if it’s only three steps from my apartment to the garbage room.

A few weeks ago we introduced ourselves.

“I’m Catherine.” Her voice was faint but pleasant, and her smile seemed a little more real when she was looking at me. She’s an Asian woman in her late thirties. Slim, with pale white arms poking out from her white, flimsy nightgown-type garment. She glides rather than walks. She wears very little makeup, another reason I think my wife is wrong about her being a prostitute. I did catch a whiff of perfume, however.

In summer, to catch the cross-breeze, she props her door open by placing something on the floor between the edge of the door and the jamb: a book of stories by Kafka.

One day I saw her open the door and step out over Kafka’s stories.

“I do interior design.”

Like half the women in New York, it seems. Catherine’s smile, now rueful, only confirmed that there isn’t enough work for them all. She also paints—oils, acrylic—but when I asked about the subjects of her paintings she said you can’t describe a painting, you have to experience it.

“Me? These days I write family histories,” I said when she turned the question back to me.

I gave her a brief sketch of my career at the magazine. They used to fly me to trouble spots around the world and I’d stay anywhere from a week to three months. I was a demon for work; I could go forty-eight hours and file thousands of words of copy without sleep. They laid me off two years ago; business was poor and getting worse. I looked for a year and a half and couldn’t find anything.

About this time I started taping my mother’s reminiscences about all the oddball characters in her family. One of her brothers had gone to prison for embezzlement. An uncle had been in vaudeville and had tap-danced with Eddie Cantor. Her father who had a long beard and wore a black coat, had delivered huge seltzer bottles from a horse-drawn wagon, carrying them on his back up four or five flights of stairs, though not on Saturday because he was religious.

I wrote up my family history and when a friend read it she asked if I could do one for her family.

Word got around. Soon I had six more family history jobs and my tiny digital voice recorder was overloaded with stories about this one’s Grandpa Ira and that one’s Aunt Bess. Between the family histories, my baking and the reading, the days in the apartment fill themselves up. Mostly I alternate between the Russians—Chekhov, Turgenev, Tolstoy—and mysteries. And some Kafka, too.

My wife keeps asking, “When are you going to get back into magazine work?” Doesn’t she know that the internet killed advertising in all the print magazines, and it’s never coming back?

My wife makes a good salary, and after eighteen years with the magazine I got a decent severance. So far we’ve been okay for money. I guess she appreciates that I keep the apartment clean and get an occasional check for doing a family history, but there’s not a lot to our marriage these days.

Now and then I catch a glimpse inside Catherine’s apartment when we say hello as she is opening or closing the door. It seems very spare, uncluttered. In the cross breeze I can see billowing curtains that are white and flimsy, like this thing she wears that isn’t a nightgown but something close to a nightgown.

Efrem Sigel’s stories and essays are in the Antioch Review, the Journal, Xavier Review, The MacGuffin, Nimrod, Pleiades, Quercus Review, the Jerusalem Post and elsewhere, and have won several prizes. His second novel, The Disappearance, was published in 2009 (The Permanent Press) and his third novel is forthcoming. He lives in New York City, where he teaches writing and supervises volunteers working with education nonprofits.