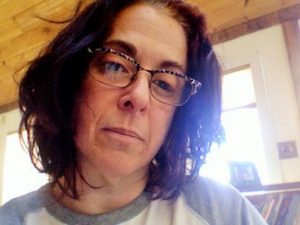 When Jenna arrived on the ward, Jared was sitting with three cops, all of them eating Light & Fit yogurt and hard-boiled eggs. She breezed in, looking recovered but for the bruise around her neck and the fact that it was nearly noon and she was still in pajamas. She pulled the last Styrofoam box of bacon and eggs from under the hot yellow lights and waved, then sat at the front of the room as if she knew the way things were done.

“Too bad she’s a fatty,” said one cop, elbowing Jared. Jared’s unrelenting sadness was tolerated because he was a fireman. He’d dropped a baby when there wasn’t even a fire; someone had reported that it never stopped crying and the crew sent him into the building. Jared rushed the baby out, didn’t see the puddles on the landing.

On Jenna’s first day Jared noticed she had a cobra tattooed on her ankle. It was the only thing about her that was explicitly rebellious and, perhaps for this reason, it managed to crawl inside his crowded thoughts. She was “on pajamas,” an AWOL and suicide risk, her naked ankle exposed—cleanly, sweetly shaved—with the body of the cobra snaking its way up from her socked foot to somewhere he couldn’t see. Afterward she drank cocoa and he sat at the opposite end of the couch while they watched Conan. They didn’t speak. Jared knew that life with Jenna would not provide the confidence and status men secured from the companionship of a thin woman, but something about her soothed him. She seemed so normal and almost giddy though her scar told a different story, one he could easily understand.

“Dude,” said Christopher, the youngest cop, “that chick is fat.” He was an ex-marine, married nine years by age thirty, who volunteered at charities and worked out fourteen times a week but never missed Sunday mass with his wife and six kids.

Jenna had learned this about him, as well as the fact that he thought all TV cops except for Sippowitz were “friggin’ Disney cartoons,” on her third day when she’d made the mistake of sitting opposite him at lunch in the cafeteria.

“Oh, and he has a pet rat,” she added between sit-ups in the exercise room. Jared was amazed that she had amassed so much information in so little time. He had been on the ward for nearly two months and had learned almost nothing about anyone.

When Jenna told her mother she wanted to marry Jared, her mother looked up as if God were mediating the conversation. “Now she abandons her impossible standards,” she said to God, then turned back to Jenna. “Do you really want to spend your life explaining that you met your husband at McLean? Or lying about how you met him?”

Jenna shrugged. “I wouldn’t lie. That’s you—you would lie. Anyhow, we’re going to have one of those Elvis weddings. Doesn’t that sound like a blast?”

Jenna stared out through the bars on the windows.

“What will you do after you’re married?” asked Jenna’s mother.

“If you don’t want a baby, Jenna, don’t have a baby. That’s the first thing I’d suggest.”

Jenna was anticipating seeing Jared in a few minutes at wrap-up group. She fluffed her hair and pinched her cheeks, which her grandmother had taught her was more sophisticated than wearing rouge, and thus would attract a higher-class man. She wished her mother would leave so she could stop by Jared’s room while her cheeks were still rosy, before the pallor of gloom settled as it always did after her mother’s visits.

Jenna moved into Jared’s condo. She decorated it with cheery pictures, yellow towels, throw rugs and a set of dishes that had belonged to her grandmother; her mother didn’t like them because they had pink in the rim, but Jenna loved the color pink, a distinction she hoped might steer her life in a different direction. Still, a funnel was gathering force inside her; she worried that everything good was over. Jared seemed to have disappeared. He could tell she was unhappy and that she needed something from him that wasn’t unreasonable, but there she was, reminding him he’d made a mistake once again, confusing enthusiasm with an ability to love. He felt stuffed inside a puffy space suit, wearing a padded helmet that made it nearly impossible to converse with anyone, even the other firemen.

“Are you taking birth control at least?” Jenna’s mother asked, pulling her daughter’s hair into an imaginary ponytail, the way she wished Jenna would wear it.

“It’s my fault. Because I have low self-esteem. The women of my generation all hate ourselves.”

“Really?” Jenna had never heard this, nor had her mother ever confessed so readily to weakness.

“I don’t know,” she made a face. “It’s just one of those things feminists say.”

“But you’re not a feminist.”

“Of course I’m not a feminist.”

In the middle of her four o’clock Jazzercise workout, the door opened and in walked Jared and the three cops from McLean. Jenna tried not to look horrified—caught manifesting her meaningless existence, wearing a pink leotard and black leggings, barefoot, sweaty, cleavage having swelled free from her jog bra during the bouncy workout.

She called him into the kitchen. “Jared, what the hell?”

“Sorry. They came to the station.”

He opened the fridge and took out the six-pack of Coors.

“Use coasters,” she said as if she had any authority. She closed the louvre doors, made herself a strong cup of coffee, and set about “tidying up,” which always consisted of the same things: dishes in the dishwasher, chairs tucked into the table, little unnamed things removed from the floor in lieu of sweeping. She called it tidying up because the words sounded pleasant, like they described something normal people did. And as she emptied the vase of yellow mums she’d bought at the Korean market the week before—watching the fetid brown water tarnish the porcelain sink, the slimy rotten leaves clogging up the dish drain—she began to cry. She looked out the window at the sooty sky and her shoulders began to shake as a silent sob made its way like an earthquake through her small body.

Even after she got a job at Dunkin’ Donuts, then the Irish pub on the Avenue, then Kinko’s, and finally, more tolerably, a vintage clothing store, Jenna felt depression return like an outgrown friend she couldn’t get rid of. It began to take up more and more space—a big jagged-edged hole where something else had once resided. She awoke each morning around three with a fresh optimism, unperturbed at the prospect of killing three hours before daylight softened the black sky. And then, after work, while she sat alone over more coffee, the dying sky pink or gray, the cityscape cold and scabrous, she wondered whether it was her fault that each day disintegrated into something torturous and nearly impossible to endure.

It took her a week after the cops visited to clean the house. She was no longer much concerned with tidiness, working and trying to stuff depression back into its box. She collected the empties, cleaned the IKEA coffee table and tried to uproot the dirty footprints from the rug using Jared’s old Eureka. Jared stared through her at the news, watching even while she vacuumed directly in front of him. In the bathroom she found an empty beer bottle on the ledge of the shower and imagined hurling it at his head, breaking the skin, and wondered whether he’d even bleed. She put the lid down on the toilet seat, sat with her head in her hands, knowing that Jared would not protect her from becoming her mother.

“You’ll be better off.” Jenna’s mother lifted her suitcase from where it lay on the bed.

“You always liked your room. And it’s just as you left it.”

Jenna stared through the bedroom window at the racquetball court. Just the top wall of the court was visible, the lines of yellow paint, the hard blue ball bouncing, disappearing, hitting a different spot. When she first moved in, Jared would go there to blow off steam and she’d keep him company, drinking a beer and sitting on the bench off to the side. He was athletic and she thought this predicted a certain strength that he didn’t see in himself. Back then she was confident that her love could keep him from drifting away. She remembered her old bedroom in Jamaica Plain: The yellow chenille bedspread. The white modern dresser. The birdhouse in the rhododendron bush made by one of her mother’s boyfriends—Steven or Wayne or Joe—one of the boyfriends with a beard. She distinguished them that way: beards or no beards, hair or no hair. Remembered little else.

“Maybe I should stay,” she said.

“Nothing doing. This is the first sane thing you’ve done in two years,” said her mother.

Jenna heard the heat knocking through the pipes and for a moment she worried an animal was trapped in there.

“Do you hear that?” she asked.

“There’s a mouse in the wall.”

Jenna’s mother opened the door, colored with thick, pink paint, and they were out in the cold hallway that always smelled of burnt oil and oregano. Once out of the apartment, Jenna could no longer hear the animal. But that didn’t mean it wasn’t in there, in the walls. If Jared had become an animal and was trapped in the pipes, it was particularly cruel to leave him in such a state. Jenna stopped moving so she could listen, squinting her eyes and holding the banister. Her mother pulled her down the noisy metal stairs, out onto the street. But even as she climbed into the Buick and waited for her mother to toss the suitcase into the backseat and start up the motor, Jenna heard the animal. It was a pathetic little animal, so lost and cute, and she thought she must be the worst person in the world to leave it—or him—stuck in a maze of old metal and steam when he was trying so hard to tell her.

Hilary Sloin is a writer of books, stories, essays and plays. She lives in the hills of Western Massachusetts with a tiny Jack Russell Terrier named Pluto. Her first novel, Art on Fire, an apparent biography that was mistakenly awarded a non-fiction prize, received the American Library Association’s esteemed Stonewall Book Award as well as many other smaller prizes. “Tidying Up” is one of 13 stories in a new collection called The Cure for Unhappiness, which is looking for a publisher. Hilary blogs here.