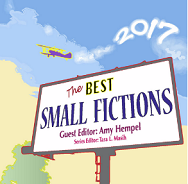 The kids had bamboo poles, the wrong gear in my opinion, and she was holding her high-heeled shoes in one hand and a beer in the other as she picked her way among the creek stones. She wore a lot of lipstick but it looked good on her when she smiled at me just before she took a pull on the Pabst Blue Ribbon. The boys struggled with hooks, worms, bobbers and sinkers but they looked grateful to be there and didn’t whine or complain. No wonder: she actually helped bait their hooks, her long red nails precise in the way they pincered the protesting worms.

Every now and again I’d look over and she’d look back and smile, until I broke the ice: “Good bass weather,” I said.

But she didn’t ask if I was having any luck, a sure sign she was just putting me on. “You weren’t thinking that,” I said. “You’re an imposter.”

“Of course.” She widened the mouth of her large purse, revealing much more than a six pack.

“How much you got in there,” I asked.

“Case. Case and a half. Do you think that’s enough?”

“That should be entirely adequate,” I said.

The day bore on. The boys weren’t having any luck with the bass either, and we had finished off the Pabst. Turned out her husband—who was her second husband—owned a gas station, and he always worked there—sixteen-nineteen hours a day. Day in. Day out. Work, work, work. Her half-sister had died an agonizing death of leukemia, and the woman had dressed to go to the funeral, but her husband wouldn’t take a day off to watch the kids and only let her know at the last minute. So she figured she might as well do something they wanted to do and didn’t give a hoot about her outfit.

“You would have been one of the better dressed among the mourners,” I said.

The boys rarely said anything to us, just sometimes asking for permission to go pee in the bushes or for a drink of water.

“Nice kids,” I said at one of the many junctures.

“Yes, I am blessed,” she said. “Truly blessed, as though there is any other way of being blessed. Did you ever hear such a crock? Don’t you hate people who make more of what is already too much?”

“I’ve only hated one person like that,” I said. “An English teacher who used to say ‘This is literature; this is life’ over and over until we students started hating both.”

She suddenly looked at me as though I had said something that meant something to her. She touched my hand. I was frightened: images from Chinese New Years past seized some of my senses. I swallowed with great deliberation.

She said, “When I was seven I wanted a doll that looked just like anyone I knew.”

“Just anyone. My stupid sister would have been fine. The girl in my class who squeaked quietly throughout grade school. I didn’t care. Just anyone, you understand, anyone that didn’t look like a doll.”

I needed to find us a way out of her fun-house recollections.

We had entered the valley of monosyllabic utterances, and it was nice there and peaceful until one of the boys started yelling and heaving on his bamboo pole. We rose and staggered over to the edge of the creek bank. I thought maybe it was a tire or a log, the way the pole was bending, but there was something definitely struggling at the end of the line. The other boy grabbed the pole to help and then I grabbed it as well as their mother, and the tip of the pole was bent almost to the water, and something was thrashing down there, something dark and dense and angry, something bigger than all of us. On the count of three, we all tugged at the same time and out of the water flew her husband, who landed on the matt grass smelling of gasoline and flapping like an idiot.

I went ahead and introduced myself but it seemed lost on him, and, to tell you the truth, also lost on the woman and the boys, who gathered Dad up and helped him flop home, leaving me with the rest of the worms and a good case of the empties. 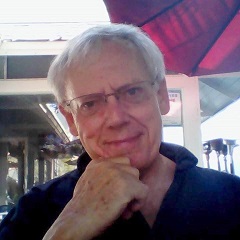 Michael C. Smith is the author of Writing Dangerous Poetry (McGraw-Hill) and Everyday Creative Writing: Panning for Gold in the Kitchen Sink (McGraw-Hill). His poems and reviews have appeared in the Iowa Review, Seneca Review, Northwest Review, and Atlanta Review, among others. A graduate of the MFA program at the University of Arizona, he teaches writing at California State University, Long Beach.