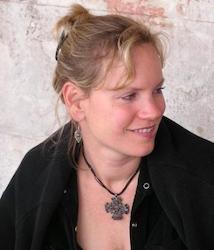 She stood in the small museum staring at the painting. She could almost see the color of his hair so like the tumbling leaves of dazzling gold the artist had captured so brilliantly. She moved closer as if it could bring her nearer to the time he was there.

“S’il vous plait.” A voice startled her. “Not so close.” The guard’s face softened and smiled as she turned toward him. She realized that Paris’ free Musee Carnavalet probably had no alarm system for their exhibits but if they had, she was dangerously close to setting them off. As it was, her nose had almost touched the ancient stone arbor where he had kissed her the first time.

She’d crossed the pond to see this painting and the Abbey Vaux de Cernay again. Twelve hours on a cramped 767 from San Francisco. She’d been afraid, not of flying but of what she would find at the Abbey. Or not find.

In the painting, the cathedral ruins and Stonehenge-style arbor were outlined in a frothy mist, haunting the pieces on either side of it. She wished she could reach out and touch the grass, stretching through time with the same oils the painter had held in his hands as he stood on the ancient grounds. But she caught the guard watching her again, no smile this time.

She had to get to the Abbey. She left the museum without looking at the city’s other snapshots of centuries past, without a glance at the miniature-sized Medieval model of Paris with its tiny wooden bridges and minuscule churches, walking right past the sloping gardens of 17th century estates frozen in time, Paris’ early suburbs. She made her way out of the mansion-turned-museum to the Rue de Sevigne and headed for the metro.

Paris was so different now with its belching motor cars and screaming mopeds, the air a patina of dense, dark exhaust. Parisian cafe tables now shared blinking computers with ashtrays and tiny phone screens with steaming espresso cups. The metro rumbled under the streets like a caged beast, endlessly searching the labyrinthine tunnels for a way out. As she rode the snaking animal beneath the city, she thought of the street woman in San Francisco who had taken her money and read her past. She’d described it as perfectly as the painter had portrayed it, the Abbey on the lake with cobblestone roads and stone walls, then and now.

After a restless night at her timeworn hotel, she brushed fresh morning croissant crumbs off her chest from the boulangerie on the corner. Crossing the city again to the Gare du Nord, she caught a train for the rainy countryside she barely remembered, watching the gritty, modern suburbs roll past her window as the train listed gently.

From the train station, she caught a cab and tried to relax as they ambled past forgotten villages still sleepy in their morning rituals and country life. But as she got closer, a long shiver waved through her, a lifetime of anticipation she hadn’t understood. They drove through the old, stone gate entrance toward the Abbey, once a forbidden shelter of monks’ quarters, now an upscale restaurant and hotel. She paid the driver and stepped out of the taxi into the esoteric world of the painting, the world of her past.

The woman in San Francisco said he would be waiting for her but now, as she stood in the middle of the painting, doubt stabbed at her. With her first step into the place she had only recently remembered and dreamed of, she wondered how she could have traveled so far and believed so entirely. She put a hand to her mouth as she stood in the driveway, uncertain which way to walk. Toward the arbor or the church ruins? The lake or the hotel? If he was here, where would she find him? And if he wasn’t, where would she wait, either for him or for her senses to return?

A quick, new synapse, a tiny essence of linkage finally gave her movement. She couldn’t face the arbor yet so faltered toward the hotel’s entry, her legs barely carrying her, energy a thing of the past. She moved beyond the front desk toward the stairway leading to the guest rooms, the very place he and the other monks had once tread, walls now covered with pastel-painted damsels in flowing attire.

“Two for lunch, Madame?” The maitre’d tried to lead her back from the stairs with his voice.

She looked to her left and saw a cavernous room with overstuffed chairs and a glowing fireplace. The room that once served as the monks’ library now served dessert after lunch.

“May I sit here while…I wait for someone?” she asked, nearly choking.

“Bien sur. Do you have a reservation?” He looked at his list.

“No, I…I’ll just be waiting here.” She moved slowly into the room she had secretly entered when she’d waited for him then. She could see the stone arbor out the window, sitting as she sat now. Alone. The waiters checked on her periodically, trying not to look sad for her. They brought her coffee, then a torte, finally a small glass of cognac. The hours dragged on just, she realized now, as the years and centuries had without him. And now finally, darkness began to settle.

A new waiter approached, working to clear the detritus of her loneliness. She looked into his face as his eyes rested on hers and her heart buckled in a breathless moment. In silky brown eyes, she saw caverns of years past like echoes down a long corridor. He froze momentarily, brows furrowing as if trying to place her. He didn’t recognize her yet, but…he would. He would.

Kirsten Steen is a writer and massage therapist living in the Pacific Northwest, sharing time between Oregon, Paris and Greece. She’s been a waitress, bartender, researcher, new construction inspector, Special Ed sub and real estate agent and has spent most of that time on a treasure hunt for natural outdoor beauty and stunning language. She can be found online at www.writeonthyme.blogspot.com, Facebook and Twitter.