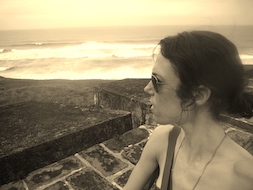 It was in the fine print at the bottom of the deed: Wormhole present in upstairs closet. Coordinates at (w,x,y,z). Seller renounces all liability resulting from discovery of wormhole by Buyer.

Sally wanted nothing to do with it. But I said wormholes were a fact of life, and we wouldn’t find a deal on a condo without one.

So, we bought it. And now she’s fucking Tomas. Fucking Tomas. I told her I needed time to think. But I don’t need time. What I need is a bottle of whiskey and a hammer.

That’s the great thing about coordinates. They’re always exactly where they say they’ll be. Unlike people. People say they’re working late and fuck your best friend in the bed you just made. I tip back the whiskey and raise the hammer. I’m two inches off, never had good aim. One of Sally’s heels gets sucked into the vortex.

I push my arm inside the hole. The air feels gelatinous and smells of carbon. A cool breeze moves from my fingers to my head, and I’m inside. It doesn’t hurt like I thought it would. My insides push out and my outsides push in, as if I’m cancelling, like everything about me has a plus and a minus.

I float like this for a while in the blackness. Then my eyes adjust and I start to see the things around me. A pair of old Adidas. A puffy ski coat, half green, half red. A small blue cylinder flies by my head. I don’t know how, but I know it’s my ego. I think back to the previous week, to the day I found Tomas asleep in my bed. I’ve been on automatic pilot since then, kind of id-like. I try to grab it but I miss. Guess I’ve been okay for a week without it.

I keep on floating, and things keep coming, flying in a spectrum of color and shape—my integrity, motivation, the keys to the Volvo. So this is all a wormhole is, a wave field full of possible outcomes. What if I hadn’t lost all of these things? Would they have shot ripples through the fabric of spacetime? What if I hadn’t lost that fight with Tomas when he confessed he was in love with my wife? Would my ego still be whole? Would the tooth he chipped be intact in my head? I glance around me, in search of the chip. I wouldn’t mind making it into a charm. In thirty years, I can show it to my grand-kids. Your gramps, I’ll say, he used to get into fights. And he fought back. What they don’t know isn’t likely to hurt them.

I grab Nico, the calico cat who never came home, and swim through the pudding. After a while, I get a little tired, so I close my eyes. When I open them, I’m floating over a lake. Only it isn’t a lake, it’s some kind of window. It waves and subsides like a bowl of jelly. Then I see Sally…Sally and Tomas. They’re sitting in the front seat of my old Volvo and he has his hands on her….

I close my eyes and the pudding pulls me back. Nico screeches. I hold her close and promise not to lose her.

When I open my eyes I see me and Sally. We’re kids in the sandbox. We didn’t know each other as kids, but wormholes present all possible turns, variations that wait in the soupy ether. It’s like Nico. Before I found her in the wormhole, the poor cat was both alive and dead. Anyway, our childhood selves are building a castle. I kiss her cheek and Sally starts crying. I unzip my pants and pee at her feet. In this one, I don’t think we end up together.

I see others. Countless others. Sometimes I win. Sometimes I lose. In one version, we’re ninety-five and Sally leans over my death bed, wearing the blue sweater I lost when I was twelve, and tells me about the affair with Tomas. “Fifty years,” she says. “He was the love of my life until the day he died.” I turn away and don’t say a word. I count this one as a win for me. Sally’s always thrived on confrontation.

I start to feel heavy. Nico is asleep in my arms and I’m afraid I’m going to drop her, lose her again, so I head back.

A Tonka truck. My temper. A friend named Andy.

I wave at him. He waves at me. Poor Andy. He has to stay in the wormhole because I lost his number.

I see a light. The red stiletto shimmies, hooking its heel around my collar, pulling toward the hole in the closet. I had thought that the wormhole would hold on to me, but it actually kind of spits me back. I hold on to both sides of the closet, pieces of dry wall breaking off in my hands. Half in, half out, my insides go all positive again. One last tug and I land on the carpet.

The wormhole closes up like quicksand. It will migrate now from the ripples I have caused. If Sally and I choose to sell the house, I’ll have to map out the new coordinates. It’s only fair. People should know what they’re buying into.

There’s a deep gash in the closet wall, the hammer lost to the bending of spacetime. My feet squish around in the puddle of whiskey. I’ll have to explain the mess to Sally.

I lost the goddamn cat again.

Keren Toledano recently self-published In Light of This & Other Things, based on her grandparents’ life as WWII resistance fighters, and is at work on a young adult novel that is not set in the post-apocalypse. Her short fiction has appeared in Slice magazine and Tethered By Letters. She received the Harvardwood Writing Competition Award in the short play category in 2011. Keren holds a BA in English from Harvard and an MA in Arts & Humanities Education from NYU. She is currently a writing associate at The Cooper Union, and a freelance writer and editor. www.kerentoledano.com