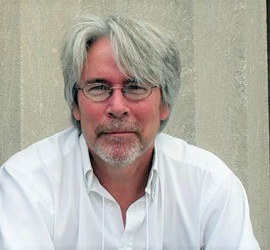 You think about him each time you do it: of your uncle, who jumped from a steel girder bridge like this one on a sunny November morning. You like to think it was a stunt gone wrong, but you know better. Fishermen found him weeks later, miles downstream, and nobody mentioned the word “stunt.” You have no memory of the funeral, but you were there, along with the rest of your family, everyone stunned, at a loss, non-family cautious, avoiding the obvious question: why? Maybe you knew a little, but you wanted to know more.

You started jumping off quarry ledges a few weeks after the funeral. You liked the look of the girls at the top screeching and dancing around after you surfaced. You loved the blue silence just before that. Sometimes you’d go back under and ponder the uncle’s last words to you, his last words to anyone: “No, I don’t,” in answer to your asking if he needed help.

You graduated to high jumps off bridges. Off you went from the top of girders into lake channels at night, always at night. No life jacket, no lights, a small drunken audience. You made two hundred for one jump. Got a hundred for the one that killed your uncle. You did that one early on, nothing strange about it, you thought, except he entered your dreams and looked distressed.

After you’d done ten, you heard the law was onto it. Girls who had been curious now avoided you, and guys kept their distance. You’d be hard pressed to say why you kept on. But you did. Alone, you drove farther and farther to find new bridges, and this one you’re driving across now would be the highest, over the biggest water yet.

You got some of your uncle’s stuff: a pocket knife, a small brass deer he used as a paperweight, the snow globe you loved when you visited his home that always smelled of ham. He smoked them out back and your aunt served them sliced on a platter, beautiful meals in front of a picture window that looked down at what passed for a valley in western Kentucky. You got a document from his days on a ship in the South Pacific, a certificate from the Neptune Society. Your uncle had crossed the equator during a world war, and they celebrated it by initiating him into “The Solemn Mysteries of The Ancient Order of The Deep.” You heard nothing about the war. He died with his stories and left you with this document, a drawing of trident- bearing Neptune at the top, mermaids gracing each corner.

You park behind a boarded-up visitor center and walk to the middle of the bridge. No cars coming. Up you climb to the top, forty feet above the road. Below, in a shaft of moonlight, the Ohio and the Mississippi come together. In the daylight, you could see the blue of the smaller river joining the brown of the greater. Now, it’s too dark to see colors. You strip and bundle your clothes with your belt. Lean forward into the breeze, soothing on this hot night. Whirlpools writhe and suck, circles flashing in shards of moonlight.

You were the last one to see your uncle. You’ve been over and over it, but now you’ve forgiven yourself, and him, and you’ve begun to understand what he did and why. Maybe, by now, you understand it more than he did. But you can’t tell anyone, not your parents or your aunt. They think you’re a drug dealer. And the bridges, they are a drug stronger than anything you’ve ever tried.

A fish breaks open a smooth spot, and on each side the banks lie quiet, moored barges solid shapes against the forest. Doubt creeps up your legs and settles in the pit of your stomach. Maybe it’s time to stop this, to move on. Maybe you should sail across the equator and join the Neptune Society. Perhaps that was the beginning of your uncle’s spiral. Not a good place to be, the South Pacific, not in the forties, for a country boy from Kentucky. You couldn’t imagine. And now you would have to imagine it because nobody told you.

You’re at the point of backing out of this one, but in the next instant, you’re leaning forward and your feet have left the flaking paint of the bridge, and in your flight, your uncle, boot propped on the bumper of the car that he’d polished with his handkerchief that morning gleaming in the autumn sun as he spoke to you and you all but snubbed him, tired, like everyone else, of his glumness, his depression, now he salutes you and says your name: Joel. Then you feel the sting against the soles of your feet, a good landing. Once again, you’ve hit nothing solid, though your descent is long, and at the bottom of your plunge, you wonder if you split the brown and blue, like you’d planned. You wonder how long your uncle lived after impact, and you hope that he did not suffer. Some might think this suffering, the pressure on the ears, the urgency to breathe when there is no air. The utter darkness. Something bumps your leg and your kick misses it.

An eddy twirls you upstream and you see the shape of the bridge passing above you and the split of the current, where one river becomes another. Your uncle’s up there on the surface in work boots that ripple where he steps, like flat stones dropped onto a pond. He motions for you to join him, up above, and you kick and you climb. He’s grinning as he gestures, at ease in the pontoon boots. You pause in your climb, between the currents—one rich with earth, the other mineral—and consider how much longer you can wait to rise into the world anew. How long until the next jump.

“I grew up in Murray,

Kentucky, near the confluence of the Ohio and the Mississippi, though I spent most of my fishing and boating time on the Tennessee and Cumberland rivers. I teach fiction and nonfiction (including journalism and freshman writing) at Maryville College in East Tennessee. My books are Paddling the Tennessee River: A Voyage on Easy Water, Coldhearted River: A Canoe Odyssey Down the Cumberland, and Liminal Zones: Where Lakes End and Rivers Begin, all published by the University of Tennessee Press. Next spring, when I turn 60, I’m going to canoe the length of the Tennessee once again with my dog, Maggie, but this time I’m going upstream instead of downstream.

“I’ve been working on this story for a few years. Part of it is based in fact. When I was a teenager, my Uncle Ed, whose factory had been on strike for a long time, did commit suicide by jumping from a bridge over the Tennessee River, and I was the last one to see him alive. Recently, after my Aunt Robbie, his wife, died, I received some of his mementos, including the strange Neptune Society certificate. I added that to the short- short as background.”