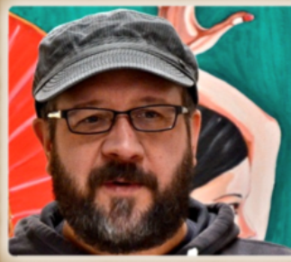 From 36,000 feet the farms look like so much nothing;
then one field meets another and boundaries result—
a communal Mondrian laid over the curvature of earth.

But there is more there in the stretches of earthen colors.
I can only speculate on the crops and what they will feed.
In the hour we pass over Iowa, nothing appears to happen.

No movement is detected. The fields seem as if they
have always been there, unchanged. I can’t imagine life
outside of the order that has been created in the lines.

I turn back to the magazine in my lap and read an article
about Pike’s Market, which includes the requisite photo
of someone throwing a fish into the arms of another.

Back in Iowa, in the last century, it was my job once
to sit in the University’s special collections and assess
donated manuscripts for gold nuggets worthy of print.

In the century before that, a man named Elmer Bockes
began his diary. I don’t know why he decided to start it.
He said nothing special about that day, but it commenced.

Forty seven years, an entry every day, 47 bound editions—
not a hint of sentiment. Each day, a record of the weather,
crops planted and harvested, fences fixed, halters mended.

No mention of his wife, no sensual description of land,
home, bed. The three days his children were born, their
entries were as commonplace as the corn in the field.

I tried to imagine Elmer tinkering in the barn in work
boots and thinning hair. His brown hands working from
the ends of his flannel shirt as the sun worked further

into the mountain. A gas lamp illumining and shadowing
stirring animals, water-plumped eaves drying and ticking.
In the morning, last night’s mended halter being secured

to a beast’s body, dull steel turning out the soil, raised
in long rows, Elmer winding his watch in blue dawn.
Blackbirds everywhere, on barn and fences, on the plain

gray wooden house. Elmer figured against the clearing,
turning the crop-seeds back in, tilling dirt into uniform
mounds as dark as the morning’s coffee grounds.

Forty seven years—I sat there for days combing for one
hint of an expressed life. One thread stitching his heart
to another. I surveyed the lonely landscape like Zhivago

until finally, a mention of going to the Fair. Nothing
special, no betrayal of a moment’s joy, the proceedings
mundane as sausage links, and then “She was there.”

A brief glimpse of an interior life! An enemy? A love
that got away? After years of taciturn cataloguing of
life’s humdrum features, maybe it was time to open up.

I read ahead, searching for clues. Would she turn up
again? A Fourth of July celebration? A sudden effusion
of flowery words bursting in a flourish of fireworks?

I’d like to say that tiny fissure blew his world open.
That one small key in the lock turned, and his reticence
undammed—but nothing followed. Volume after volume

I scrutinized the weather patterns of Iowa, logging of
crop events, fall harvests, set down by a leathery hand.
His life so bound and rocky nothing could gain purchase.

Year after year it went, until one day it ended, and his son
tied it up with the longest entry in the entire compilation,
explaining with some measured emotion how Elmer

dropped dead shoveling the car out in heavy snow.
A fitting departure—a solitary act rife with futility.
The snows of Iowa fill in the fields again and again.

It couldn’t possibly have been the man’s intent to
have a more profound effect on me than any art, any
literature, any music I’ve encountered before or since.

I spent days trying to shake his ghost, but he was chained
to me as I walked to my classes, sat at my typewriter, lay
in bed with my wife. I was shocked by the brutal starkness,

the complete abstraction in a very objective and concrete
world. Nearly half a century committed to paper, only one
loose thread. One mystery so shallow it dried in an instant.

A lifelong exercise in stoic, repressed communication—
encountering it desiccated my heart and made me believe
in God, just enough to believe in God’s abandonment.

Still on the plane, I return my attention to the ground.
Fewer farms now, and the beginnings of mountains—
like microscopic organisms growing uncontrollably.

Thick clouds become thinner, the closer they get, until
the whiteness separates completely and what was there
slips into the ether and there’s nothing left to explain.

Surely there is more than I see—interiors of fields
and squares of houses, generations cycling through
the seasons under the expansive field of blue sky,

occasionally a plane flying over filled with distant
lives, abstract and common as grains of fall wheat
that culminate in an immense register of abundance.

Sean Webb has received many honors for his work including fellowships from The Arizona Commission on the Arts and the Utah Arts Council, and the Passages North Neutrino prize. He received an MFA from the Iowa Writers’ Workshop and is a past Poet Laureate of Montgomery County, Pennsylvania. His chapbook, The Constant Parades, was selected by Afaa Weaver as a runner-up in the 2016 Moonstone Poetry chapbook competition. His work has appeared in many publications including Prairie Schooner, North American Review, Nimrod, Mudfish, The Quarterly, Schuylkill Valley Journal, Pittsburgh Poetry Review and the anthology Frances and Clare in Poetry. He also had a poem included in the exhibit “Making Magic: Beauty in Word and Image” at the Michener Art Museum. You can see more work at seanwebbpoetry.com.