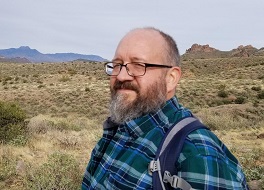 From the center of my mind (or physiologically
within my occipital lobe [which, ironically, I must
conceptualize as well—a meaty wrinkled mass at
the back of my walnut-troping brain]) I conceive
the world’s oceans as successfully as I conceive
galaxies, billions of galaxies, the hotly expanding
universe without end (I wave my hand and dispel
tiny satellites of twaddle floating before my eyes).
I look down, god-like, at a map of the Pacific.
Snippets of science whorl in my brain imagining
immeasurable hefts of crust lying in great masses
over the mantle, tectonic plates shifting, fracturing,
magma rising and erupting through the sea floor
and an unfathomable Neptunian churn of ocean,
tiny atolls, reefs, banks, shoals, and seamounts
pin-pricking the colossal oceanic skin, thousands
of miles apart in isolation, that when conceived risks
my mind’s loss in the inconceivable universal scale.
Under a thin line where sky meets sea, for millennia
isolated flora and fauna evolve unhindered and remote.
Somewhere between planetary formation and my
struggling mind lies Wake Island. Barely noticeable
in that scale. Like death—distant, remote, unreal
psychologically out-of-the-way and undealt with.
The world spun under a star-filled sky, small, nightly
fires swallowed up around the globe by the darkness
encompassing half of the planet, day in day out. Epochs,
millennia, all created to give linear dimension to change.
In isolation, Wake Island cotton and the flightless
Wake Island rail (long-gone now, ill-equipped to save
itself, existing now only in out-of-print books) cohabited
with the handful of living things—hermit crabs, insects
scrubs, mollusks, Polynesian rats (no more Polynesian
than Norway rats are Norwegian), worms, and seeds.
Things that found their way around the globe. There
being no fresh water, the rail lived without drinking.
Flightless, there being no need to fly for thousands
of years, they lived on just two of the three islands,
the third being too far just hundreds of feet away.
There was no need to go anywhere else, not knowing
there was anywhere else. Courtship and copulation
in July, nesting in depressions on the ground in
August, clucking and chattering. Living through
nameless generational collectivity over millennia.
Isolated, fearless, curious, flightless, therefore—
in the midst of WWII, the rail’s habitat destroyed
from aerial bombardment, starving Japanese troops
(who occupied the island a few years earlier) isolated
themselves due to blockades, ate the last of the rails.
What else to do when we become hopeless and isolated.
There are no permanent human inhabitants of Wake.
There never have been. The extreme isolation is
too much when you are aware of it. Too small,
too remote to ever consider staying a lifetime.
Wake sits at 19 degrees, 17 minutes north latitude,
and 166 degrees, 39 minutes east longitude in the
Pacific Ocean. “Where America’s day really begins”
(sign on Wake terminal). As I write this, it is already
tomorrow on Wake. Strips of land surround an azure
lagoon that rests in a volcanic crater that belies earth’s
power. The land rises a mere twenty feet above
surrounding ocean. There are just a handful of acts.
Through spring, Wake sits fixed between horizons.
The Southern Cross one way, North Star the other.
The moon rises from the Pacific like a great eye
and the Milky Way rends the fabric of space.
There is a master script for all this, allowing room
for endless variations. Wake became Wake and was
destined for everything, feather poaching, castaways,
war. How and when they occur drift in on currents.
Wake has its own graces and strange morbidities.
Here, far from Wake, I work in my basement
next to the city’s water supply. Millions of gallons
in a steel tower in the sky. A massive captive body
of water, contained and municipally regulated.
I think of Wake, I think of Wake for hours. I am
beginning to suspect the only Wake of consequence
exists in my mind. Such remoteness and design
seems impossible in my subterranean room.
My obsession with Wake relieves me from
my routine loss and worries. I am grieving.
I am grieving what I will lose. But Wake is not
a remainder. Wake only exists for us in encounters,
the history of an “other.” Wake is Wake for Wake’s sake.
I accept Wake’s existence; neither heaven nor hell.
Somewhere in-between. Timeless. The Wake of my mind
lies somewhere between consciousness and conjecture.
I will find my way to Wake. I have known no ocean
vastness, having never left my continent, but I will know
the cobalt blue lagoon, blank as a meditating mind.
I will transubstantiate in the sky above. When I land
on Wake, I will purify myself in the placid lagoon
that lies over the earth’s great magnitude—
a tiny roiling cauldron of remote unlikely birth,
and rise and subsume the Universe!

Sean Webb lives in Philadelphia where he works as the managing editor and chief lexicographer overseeing a line of medical dictionary products. He has received many honors for his work including serving as poet laureate of Montgomery County, Pennsylvania in 2005. Most recently he was awarded the Passages North Neutrino prize and he was the first place winner of the Gemini Magazine Poetry Open in 2017. His recent chapbooks include The Constant Parades and What Cannot Stay Small Forever. His work has appeared in dozens of publications including Prairie Schooner, North American Review, The Quarterly, Seattle Review, West Branch, Philadelphia Stories, and Schuylkill Valley Journal. More information and poems, as well as links to purchase his books, can be found at seanwebbpoetry.com.