THE LUCKIEST KIDS IN THE WORLD 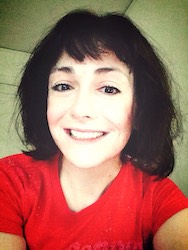 They didn’t tell me how much she would scare me.

The doctor never said, as we watched the sonograms from month to month, as we signed the release papers, as they put a small needle into my growing stomach, a treatment that made her baby number 19347, they never said. They never said what these babies had done to the other families that had chosen to have the luckiest children in the world.

They said a lot of other things. They showed us charts and videos. They gave us a binder full of materials. They introduced us to the first child to ever be intellectually enhanced.

She was five. She had scabs on her knees and lank pale red hair in two pigtails

She did trigonometry for us on a white board in a sunny conference room, told us a story in Japanese. When she left, the doctor said that she did online college courses most days. She showed us pictures of the paintings the girl had done, but not her parents, or her room at home, or any siblings she might have.

They took Alba away soon after she was born and I fell asleep. I woke to a day that had only started a few minutes earlier. Brett was there still when a nurse brought the baby back. He was tall, with hair going silver.

“Gonna change the world, these kids,” he said as he handed her to me. “My own grandchildren, twins going to be born in the summer, they’re getting it done too. My son wasn’t sure, but I told him, ‘Think of the babies, think of what they’ll be up against if you don’t.’”

She stood at my bedside looking at us. I tried to hand her the blanket with Alba wrapped in it. She stared into the baby’s face and then, tears in her eyes, backed out of the room.

The nurse patted my arm and smiled at Alba and then took her away again after giving me something to put me back to sleep.

We went home the next day. Brett drove us, but when I stood in the driveway waiting for her to turn off the car and come inside, she didn’t.

So, I took Alba inside by myself. I got fresh water for the flowers that been delivered. A pink balloon that said IT’S A GIRL! followed me around the apartment for a while, pushed by the warm air of the central heat.

I was relieved when Alba finally cried and broke the silence.

I wiped down her skin, skin I was scared of tearing because it was so thin. I fluffed her head of dark curls, fed her, and dressed her in the tiny clothes we’d stockpiled over the last nine months. I put her in her crib and fell asleep on the couch.

When I woke up, it had started snowing.

They said she would start to speak within the first six months but that walking wouldn’t come as fast.

“She’ll understand how, she’ll want to do it, she’ll tell you she’s mad she can’t, but her legs just won’t let her. Her mind will be among the sharpest ever, but we can’t do anything about a newborn’s legs.”

The doctor had said this with a smile. She didn’t say what other people had done when they heard a newborn speak, what an infant had to say. Every time Alba cried, I cringed, bracing myself for her first words even though she was only hours old. Would she call me names? Would she speak a language I didn’t know?

Her first day home drew to an end.

I made tea. Alba was quiet in the living room when I left her alone. They said she’d be quieter, less frustrated, because she could comprehend more and the world would be a more orderly place for her. I put her to bed and went back to our room, where I waited.

Brett came back at three a.m., drunk and humming a song I’d never heard before.

I asked her where she’d been and she reminded me that it was New Year’s Eve.

There was too much snow the next morning for her to leave again. She woke up at noon and stayed in the bathtub for hours. She stood at the window watching the plows and wouldn’t change the channel from the local news. Her hair was in a heavy braid dripping down her back.

She put on her shoes. She undid her braid.

“Are you going out again?” I tried to hold Alba to me but she pushed as hard as she could against me with her soft arms.

“They plowed the roads. It’s safe.”

Alba moved her mouth as we talked. She stared at the ceiling, at our faces. She seemed to comprehend but couldn’t move much on her own and didn’t like that sensation at all. We watched as her forehead wrinkled up.

“She’s listening, Eloise. She’s taking it all in. I don’t like it.”

In the end, she stayed home that night. We opened a bottle of champagne and Brett drank most of it and slept on the couch. The board game we’d started was still on the coffee table, the pieces where we’d left them.

Sometimes I woke in the night to change the baby and found Brett at the door watching us. She’d scuttle away when I looked up, gone before I could speak.

By the end of January, Brett’s things began to disappear.

I noticed our closet was less full. A picture of her sister was gone from the mantel. One by one, where pairs of her shoes had been, there were only gaps. I moved my shoes farther apart to make up for it. Her boss called to ask if she was ok because she never showed up. Alba and I drove around looking for her, but she was home in the bath with a bottle of wine when we came in. She had a huge bruise on one arm. She’d cut her hair. I noticed I could see her ribs.

Alba, at five months, said “No.” I nearly dropped her on the floor in fright and that was one of the few times I’d heard her cry. “No,” she said again.

I took her to the park sometimes. All the mothers with their strollers peered at each other, peered at the babies sleeping and drooling and making little fists. We all wanted to ask.

Is he one of them?

Did you do it?

In a whisper: My nephew, they said his IQ is almost 200. But his sister ran away. Three states over when they found her. In a home now, poor girl.

And sometimes we heard tiny voices coming from inside the strollers as walked past, words slurred from toothless mouths.

I tried to take a picture of the three of us when Alba turned six months old. Brett was always half out of the frame, sliced in two by the camera.

Brett went to the hospital at the end of June when a coworker found her passed out at her desk one morning after she’d been there all night drinking by herself.

“What’s happening?” asked Alba over and over as I drove.

Brett pretended to be asleep when we went in. She had dyed hair a color I hadn’t seen. There were unfamiliar hollows in her cheeks.

I only saw her yesterday, I thought. I held the baby and watched Brett and thought again about the morning before to remember if I had actually seen her yesterday and I couldn’t. I remembered the dream I’d been having when I heard Alba screaming “No” into the baby monitor. I remembered that it was still dark when my eyes opened, but I couldn’t recall if I had seen her face at all or heard her in our bathroom, showering, brushing her teeth before she left, or if I felt the cold in a bed she’d never occupied.

I called her name and she didn’t respond so I left with Alba and went to get coffee. The nurse from Alba’s delivery was there in the cafeteria.

“Who are you?” Alba asked him, and he clapped. His grandsons were going to be born the next week.

When we got back up to her room, the coworker was there, the one who had found her that morning passed out in her office. They had said someone found her, but I didn’t realize he was a teenaged TA with blond hair that flopped into his eyes and a few pimples on his forehead when he pushed it back. They didn’t say he was otherwise wrinkle-or blemish-free, or that he’d shake when he saw me coming.

He handed me an envelope with my name on, written in Brett’s handwriting.

I don’t love her.

What have we done?

Then one day, Brett’s things were all gone. She didn’t come home for days. I had found the email with her travel plans weeks ago though, the copy of her new lease, so when she didn’t come back on the third night, I only sent her a text to say goodbye and that I loved her, but she’d already changed her phone number.

“Who is this?” came the reply.

A week later, I did a search for her online and couldn’t find her anywhere. She had apparently changed her name.

I lay in our bed alone, listening to our daughter on her baby monitor.