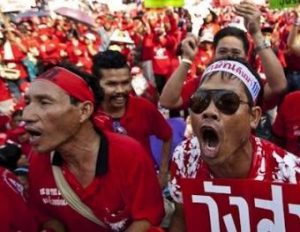 The Baan Rim Sathorn apartment building was hidden among tin houses and overhanging branches, a fringe of Bangkok jungle where wild dogs roamed freely. The owner of the small building smiled each morning as I left for the corridors and back alleys that led me to the BTS Skytrain. Foreigners were few and far between here, notwithstanding the Frenchman living across from me who entertained bar girls every night to the sound of looping electronica.

When I left that morning, the aroma of grilled chicken greeted me outside the building as usual. The air held a still warmth. Bare-chested men, their skin tan and embedded with wrinkles, drank beer on the front steps of the local convenience store. They grinned and waved at me, having long ago adopted me as an honorary Thai because of my dark Chinese features. Except for my neighbors, it was quiet. There were no students in uniforms walking hand in hand, no motorbikes buzzing by with passengers perched at the back.

The closer I came to the BTS, the more dulled the sound of the awakening city became. The main highway lay empty and the stairs up to the BTS were blocked by a bright yellow gate.

With no other choice, I decided to walk, as did a smartly dressed woman also confused by the silent BTS. A short, fitted, business skirt complementing an elegant, collared shirt, she was the embodiment of an urban Thai sophisticate: beautiful and composed. The shopkeepers, normally rolling up windows and shifting racks of merchandise at this time, were all missing.

“Today is Tuesday, right?” I asked the woman in English.

“Of course,” she said, without looking at me.

After about a mile we saw a lone vehicle, a converted wagon straining with red-shirted passengers. The occupants were festive, as if celebrating a wedding or New Year’s. One young man, smooth-skinned with a thin mustache, hung listlessly out the window with a bloodied T-shirt tied around his head. An older man held up the injured youth with one arm and waved a rifle in the air like a flag with his other.

The vehicle slowed to a barely perceptible roll. With calm eyes, the older man pointed the rifle straight at the woman. She stood still, a tightening of her lips the only betrayal of emotion. The injured boy (for now I could see that he was barely in his teens), was dragged into the wagon. The others inside stared at us without expression. Further away, I could see smoke, but here on the expressway, the beautiful business woman, the collection of men inside the wagon, and I were the only people in the world.

Finally, the man spoke, two measured phrases aimed in my direction. He then grunted and the car sped up the highway.

The woman and I held our poses. I felt the intake of breath at the back of my throat. 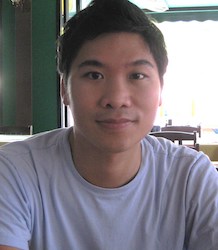 Denis Wong lives in Brooklyn with his wife and son. He is a candidate in the City University of Hong Kong MFA program for creative writing. He was a founding editor of Kartika Review, an Asian American literary journal, and has twice been a finalist in Glimmer Train fiction contests. Wong has been a teacher in Shanghai, Hong Kong, and New York City.