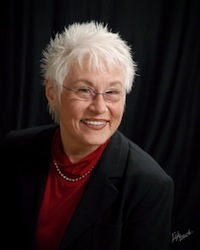 I chose Kathy to give The Ola Dress to. I thought she was the most sentimental of all the second cousins. I remembered her as a child, her sweet smile, her loving ways. Everyone always said she was the grandchild most like Aunt Alice, my mother’s oldest sister. Kathy was the one who sent birthday cards to Mama and pictures of her children in Christmas cards every year.

It was the night before she died from ovarian cancer that Mama told me about The Ola Dress. It was the night she wanted to talk, and she wanted me to take notes about everything she said. I sat in a chair at the foot of her bed with a notepad and pen.

“The family pictures are in that second drawer to my desk in the living room,” she said. “Separate those by family and give them to whichever family they belong. That gold Depression glass bowl with the roses in the bottom is something Alice brought me from the World’s Fair. You can keep it.”

She waved her hand in the air over her face as if shooing away a bug. Then she continued. “There is an old dress in the bottom drawer of my dresser. We always called it The Ola Dress because it belonged to a little cousin of ours who died young. We got her dress, and Alice tatted a neckline to run a ribbon through. You might want to put that in a shadow box.”

Then she got philosophical. “Life is just a book, and this is the grand finale,” she said. And, “It is just as important to prepare for death as it is to prepare for life.” And, “Don’t hold anything against anybody, whatever they did or didn’t do during this time of my sickness.” And, finally, “Is everything all right? Between us?”

Ironic that she would ask that last question. It was the question I always asked her, the question I asked to make that gnawing feeling of guilt, or something not being right, go away. A feeling that the radio station was not quite on the mark, a little sound of static inside my heart. The question was always brought on by that look on my mother’s face, the sad look, the look that made me think I had done something wrong, made her mad, hurt her feelings.

So often I had. If I talked back or touched something in the store after being told not to so many times, there was that look, the sad look. And the waiting began. Waiting for forgiveness. It seemed like hours, the back turned, the silence, the look, that look.

“Mama, smile when I smile,” I once said, looking up at her, the tips of my fingers touching her elbow as she stood staring out the window over the kitchen sink.

“Is everything all right yet?” I asked, after waiting longer.

If everything wasn’t all right yet, the answer was silence.

“There are some things that saying ‘I’m sorry’ won’t make all right.” When she said that, I wondered what those things might be. What could you do that could not be undone? You could kill a person. Saying ‘I’m sorry’ would not bring a dead person back to life. I wondered if my mother thought I would ever commit a murder. When she said those words, life seemed like a long tunnel of waiting with something beautiful only at the very end, something like blue light, like pink quartz, like forgiveness.

What Mama wanted to know that night was if that never-again-mentioned subject was still standing between us, or if it had been finally put to rest. It was a subject I would not discuss again, not on that night, or the next day, or ever again with my mother.

“Mama, I want to go live with Gale,” I said in the letter I handed her at age twenty-eight, on the day I had designated to tell her in her living room. “She makes me happy, and I love her,” I wrote in my leaning-backward handwriting.

The letter that day slipped from my mother’s fingers. It fluttered to the floor like a wounded bird. My mother’s face went into her hands. She shook her head. The tears came. “I can’t live here in this town any more,” she said. “I’m going to have to move.”

I can’t explain what happened to me in my bed that night in my apartment alone. All I know is that the next morning, nothing in my life was the same. I could not do the deed. I could not move ahead, my mother’s life ruined. The feeling had to go away. That was all. I promised God that I would never kiss another woman.

The next morning meant one phone call to my mother. “Never mind,” I said. “It’s not going to happen. I take it back.”

From that day on, I became the person that I could live with. My mother and I never referred to that day again. Until that night and the question she asked. “Is everything all right? Between us?”

I met Lauren on match.com, and we were married in Vermont. The day I went to meet Kathy at the Mexican restaurant in Eatonton, I took our wedding pictures. I had put them in an album, and I was filled with the zeal and confidence of a new convert. Kathy was young and hip. She would be cool with the news.

I left The Ola Dress in the car when I went into the restaurant. It was big and was in a shadow box with a glass front and a large, cumbersome wooden frame. In my arm I held the album containing our wedding pictures.

Kathy looked like a hippy. She wore a soft cotton peasant shirt in colors of purple and green. Her long brownish-graying braid hung like a rope over her left shoulder.

“I’m so glad you told me,” she said, turning the pages of the album. “Now I can relax,” she said. “Now I can really hug you.” A strange statement, but I thought I understood. It meant, “Now I really know you.”

When we went to our cars after lunch, we moved The Ola Dress from my trunk to hers. She seemed pleased to have it.

It wasn’t until just before the family reunion that I learned that Kathy had told everyone. All my first cousins, her parents, who then told their brothers and sisters. Soon all my first cousins in Atlanta—all of Aunt Alice’s children—had been told that I had married a woman. All these cousins, Fundamentalist Baptists who had surely voted against Obama. “I didn’t even know two women could get married,” Kathy told me her mother, my cousin Patsy, had said. Kathy had many excuses about why she had told them: it was an accident; she had let something slip about how happy she was for me, and then Patsy wouldn’t let it drop until she told her. Patsy told her husband Buster. Buster called up Larry and Frankie. Larry called up Bertha and Bob. In less than a day, all of Aunt Alice’s children and their husbands and wives and offspring knew.

But I went to the family reunion anyway. I was determined to finally live my own life.

At the reunion Kathy had an album of her own. She was proud to show me the pictures from her and her husband Dale’s hunting trip to Africa. I sat down and turned the pages. There on every page, one after the other, were pictures of Kathy with her rifle by her side, genuflecting beside the corpse of a dead animal, its feet folded as if in prayer. There she was on every page, posed the same way, smiling the same smile, her long gray braid hanging over her shoulder, proud that she was a real woman who knew how to shoot and kill beautiful animals. She was not proud of the casserole she brought to the family get-together, but she was proud of her album. Zebra, antelope, caribou, wildebeest. Page after page of carnage. Why would you kill a zebra? I was thinking as I turned the pages. I was not thinking, Now I can really hug you.

Before I left, Kathy said, “You and Lauren must come and see our house. All the animals have come in, and we have them on the wall. I don’t know how you feel about early dead animal,” she laughed.

“Well, I’m thinking that The Ola Dress probably doesn’t fit in with the décor,” I said.

“Not really. I gave it to Daddy, and he has it on the wall in the basement. It looks good down there.”

I pictured it. The Ola Dress encased in glass, protected, waiting, ready to be passed down through the generations. The leftover from a dead girl, frozen in place, something that probably wouldn’t fit in anywhere.

Sandra Worsham lives in Milledgeville, Georgia, where she attends “Wings” every Tuesday afternoon with friends at a local restaurant—no literary symbolism: the wings are cheap on Tuesday. Her stories have been published in Carolina Quarterly, Chattahoochee Review, Memphis Magazine, Ascent, and Los Angeles Review, among others. In 2006, she received her MFA in fiction from Bennington College. Her story “Pinnacle” won the 2006 Red Hen Press Short Fiction Award. She is currently working on a memoir entitled Going to Wings: a Memoir of a Late-Life Coming Out. “The Ola Dress” is based on stories from this memoir.